The NBA regular season is less than a week away, which means fantasy drafts are buzzing. No matter your league's size or format, the Rotoworld Draft Guide has you covered!

Picking 12th in a snake draft, and wondering who to take with back-to-back selections? Check out our Top-200 lists for 8-cat and 9-cat. Need help identifying high-upside players in a points league? We have customizable rankings for points leagues, too. Dynasty leagues? Check. Projected stats and fantasy values? Yes and yes.

Get the Rotoworld Draft Guide!

The deeper you dig the more you'll find, including columns discussing the fantasy impact of the summer’s biggest trades and signings, comprehensive injury reports, ADP analysis, busts and sleepers, position tiers, and how to abuse the default rankings on ESPN and Yahoo. If you're planning for an auction draft, you'll be happy to find projected $ values for the top-175 players. Here's a sample of that recent column, which includes a full Excel sheet for those interested in exploring and/or tweaking the numbers:

"Auction drafts are terrific. The tyranny of snake-draft positions can't prevent you from acquiring your favorite players. You watch as opposing owners squander their salary cap on players you despise, and fill your final roster spot with a $6 roll of the dice. When you look back at the roster you've assembled, you find…a top-heavy team with no clear identity and a plethora of injury risks? How did this happen?

Russell Westbrook cost $84 and getting him felt great. With just $116 left for 12 more roster spots, however, you watched helplessly as player after player went far below market value in the mid-tier range. D’Angelo Russell for $16? You should have had him. Myles Turner for $31? Highway robbery. And that final player you spent $6 to acquire? That was Greg Monroe -- you took him because you desperately needed another center, and you only spent $6 because you miscalculated and had too much cash at the end of the draft.

Auction drafts are terrific...when they go well. When they go poorly, you destroy your chances of winning a league before it even begins. The good news is that simple planning can tilt the odds in your favor -- the first step is to have a working knowledge of auction-style drafts, and to come in with a clear strategy. For this, refer to Jared Johnson's aptly-titled article, Auction Draft Strategy Guide.

The next step is to understand how much a player should be worth, roughly, given your league's size and settings. With that goal in mind, I've assigned auction values for the top-175 players in the 2017-18 season, as determined by my projected stats and fantasy values.

The auction prices below are based on 8-cat values, weighted by projected games played. To change individual players' projected fantasy values, the league size, or the salary cap, just download the Excel file this is based upon! Before we get to individual prices, however, let's step back and look at the big picture. 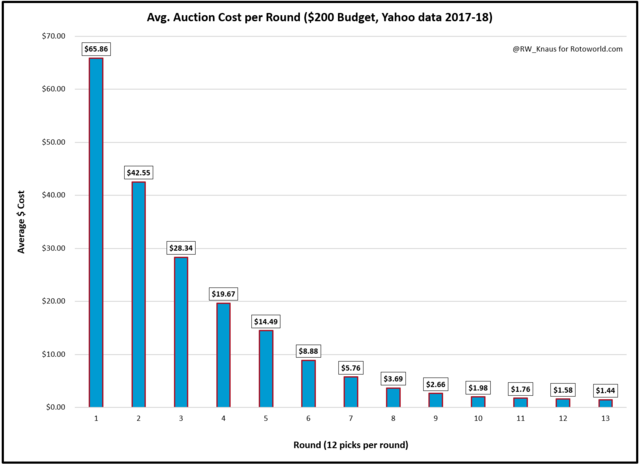 There's a premium for elite players, clearly, whereas most auction owners can fill out their bench with a handful of guys in the $1-$5 range ... My projected values suggest that owners tend to overpay for elite options -- about $4.25 per positive z-score (for simplicity's sake) in the first round, a figure that falls steadily as the draft progresses. This is somewhat misleading, however, since the limited number of elite players creates a classic free-market conundrum, wherein demand outstrips supply. Furthermore, elite players often increase their appeal by contributing to categories which are harder to find late in drafts -- high-volume points and percentages, blocks and assists...

Let's move on to the next chart. 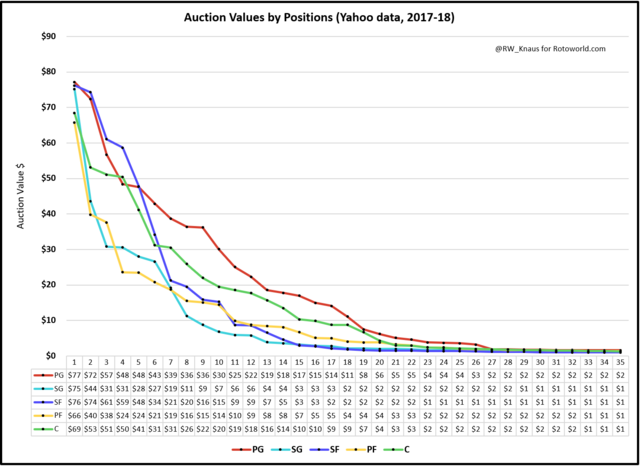 There's a lot of data contained in that chart, which I discuss in the full column. For now, let's take a sneak peek at my projected auction values:

Those values are based upon a $200 salary cap, but the entire thing can be updated to match your league's settings. You can even change the values based upon personal strategy -- not comfortable spending 25%-30% of your cash on a single elite player? Within the spreadsheet you can change your desired level of spending per 'round' of 12 picks (20% for Round 1, perhaps, and 15% for Round 2), at which point each player's values will adjust accordingly. Then, if someone's price exceeds what you're willing to spend on draft day, you know it's not worth the reach.

For the rest of the Auction Values column, commentary on the charts above, auction $ prices for the top-175 players, and a customizable Excel spreadsheet...you guessed it, head to the Draft Guide! We put a ton of work into it and don't stop until the regular season tips off. On that note, the hoops crew at Rotoworld sincerely wishes everyone the best of luck on draft day...even if luck is a poor substitute for the Guide!