Today's column discusses consistency as it relates to elite fantasy players. There are certain guys who seem boom-or-bust -- they can have a terrific game one night, only to bomb a few days later. One player might struggle against opponents with small-ball lineups, another might struggle in the second of back-to-back games. A player could look lethargic while shooting 4-of-16 simply because he didn't get his pre-game nap.

Then there are the fantasy metronomes, players who give you steady production night in, night out, seemingly oblivious to changing circumstances. Which players fall in the first category, and which in the latter? Rather than rely on anecdotal examples or a 'sense' of which players are most consistent, I'll be using standard deviations as a stand-in metric for consistency.

Below is a list of the top-50 players in the NBA's official points-league scoring system. It's the same scoring used by FanDuel, and is now the default for Yahoo, but if you're not familiar with it you can read more here. Ideally, I would have gone into the top-150 players, but I ran out of time -- I must aggregate boxscores for each individual before running the numbers.

Here are the results: 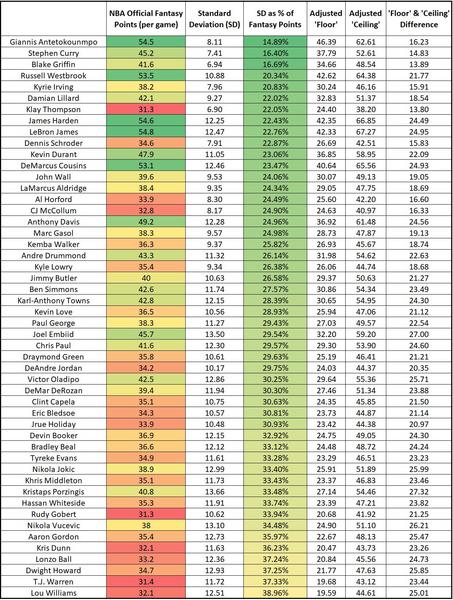 Raw standard deviations can be misleading. For instance, James Harden and LeBron James have SDs above 12.0, which is comparable to Devin Booker or Bradley Beal. Since Harden and LeBron average so many more fantasy points, though, their actual volatility isn't as great as Booker or Beal with the same SD.

Giannis Antetokounmpo is a remarkable case, with a standard deviation (8.11) less than 15% of his average points-league scoring (54.5 points per game). As a result, you can generally expect him to be within the range of 46.4 to 62.6 points on any given night. For a less consistent option like Lonzo Ball, however, we find a wide range of 20.8 to 43.7.

Players can be inconsistent through no fault of their own, of course. Blowouts can lead to sharply reduced minutes for veterans and starters. A coach might abruptly change a player's role from night to night (whether they're riding the hot hand or simply being capricious). It might be situational, but that doesn't make it any less important -- this column is limited to quantifying consistency, not explaining the 'why' behind it. Perhaps Ball is more susceptible to the factors discussed -- bad matchups, coach's whims, off nights -- but whatever the cause, we can say confidently that he's a very volatile player to own.

Editor’s Note: If it feels like people are talking about Bitcoin everywhere you go, it’s because they are. And now you can add FanDuel to that list, who this week are hosting their Bitcoin Bowl, consisting of two separate contests where you can win real Bitcoin. Join the Bitcoin craze now!

1) To be clear, I'm only interested in how consistent players are when they're active. As such, these numbers don't include DNPs, whether due to injury or precautionary rest. Joel Embiid would look far more 'volatile' if you include his random zeroes, obviously, as would anyone who missed extended time with an injury.

3) Eric Bledsoe's numbers are only from Milwaukee...I'm only interested in his current role, not whatever happened while he was on the Suns to begin the season.

4) D'Angelo Russell and Paul Millsap would have been on the list of top-50 players, but I bumped them due to lack of games played.

5) Finally...the most consistent players aren't necessarily better, and the most volatile players aren't worse. If you're swinging for the fences in a DFS league, you might prefer a player whose volatility will scare away other owners, in the hopes that he 'hits' that night. On the other hand, you might trade for more consistent players if you're looking ahead to the fantasy playoffs and don't want to risk an off-week from your one mercurial superstar. You can't make those decisions, though, until you know which player is which.

I hope to run this analysis for more players in the coming week -- if you have a few guys you're curious about, or even a full team you'd like me to run the numbers for, send me an email or find me on Twitter @Knaus_RW. I'll do my best to reply. I'm also hoping to put out updated "Team Matchups vs. Positions" data soon. With a big assist from Rotoworld reader Oleg Feygin, it should be easier to produce those charts more frequently.

I’ll leave you with a chart showing the top two games this season for each player listed above, using the NBA official points-league/DFS scoring system. My assumption was that the majority of them would have come at home, and indeed 57 of these 100 performances were home games. Thanks for reading, and good luck this week!