Today's column breaks down player values, both individually and by positions, in the NBA's new "official" scoring system. FanDuel and Yahoo are among the major fantasy sites which have adopted the system, which makes it easy to quantify and analyze fantasy values – for instance, we'll see below that small forwards are by far the weakest position, accounting for just 15.3% of total value this season.

Before going any further, here are the details of the NBA's 'official' scoring system:

Personally, I love fantasy sports for the sheer variety and nuance -- a 14-team roto league with standard 9-cat is vastly different than, say, a 10-team H2H with double-doubles and FTs made instead of FT%. That's part of what makes it endlessly entertaining. That said, the new 'official' scoring definitely has its place, lowering the bar of entry for new players, while standardizing scoring across FanDuel, Yahoo Daily, and many other sites.

If you're in a points league with different settings, consider the findings below to be a conversation starter -- how would the charts and graphs look different in your league, and why? If you want a clearer picture of player values in a specific system, head to the RW Season Pass for customized scoring, player rankings, team reports, and a whole lot more (including weekly live chats with both myself and Jared Johnson).

Now that the table's set, let's dig in. This first graph shows the percentage of total value contributed by each category this season, among the top-175 players: 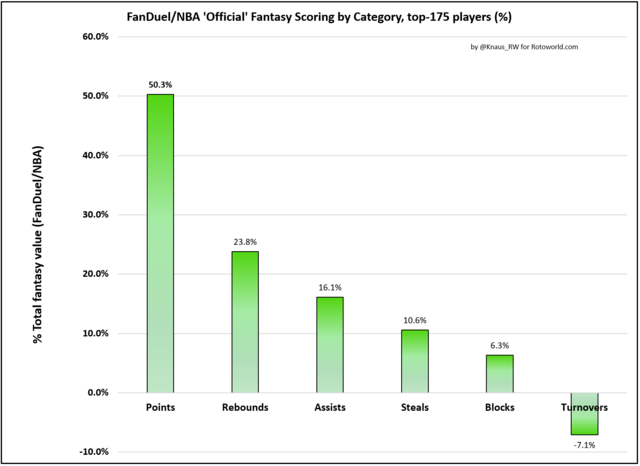 I've done this analysis a few times in the past, and the numbers haven't changed by a lot, but there is one meaningful difference -- this scoring system now awards three points for each defensive stat (steals and blocks), as opposed to two points in previous years. As a result, those categories have gained in importance with a corresponding dip in points (52.4% of total value in 2016, 53.3% in 2017), rebounds and assists. If you're interested in the comparison, check out my DFS column from March 2017.

Despite that shift in values, points are still the dominant theme in the NBA's official scoring system, accounting for half of all fantasy value. From a broad-based perspective, points are twice as impactful as rebounds and nearly 10 times as impactful as steals. Rebounds amount to nearly a quarter of all value, and assists are at 16.1%, so the three typical triple-double categories (points, boards, assists) provide the overwhelming majority of value -- this isn't a format that's kind to specialists, to put it lightly.

In a roto league, or a category-based H2H, you'd be thrilled if a player gets two steals and two blocks in a game. That's useful here, too, but it adds up to just 12 'fantasy points'...the exact same amount as 10 rebounds. This emphasis on scoring and boards helps explain why so many PFs are in the top-175 players. Here's the breakdown by position: 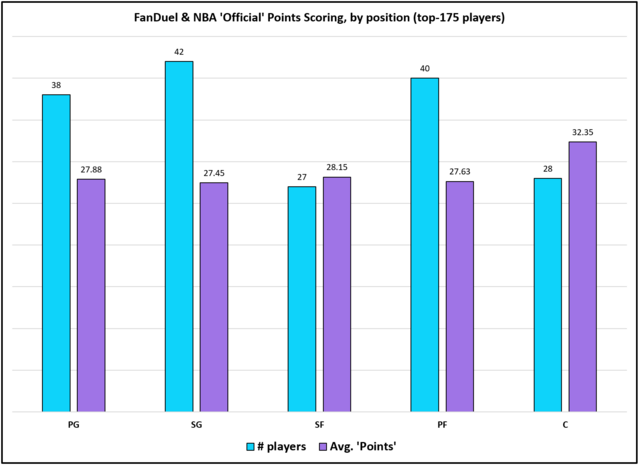 Shooting guards, power forwards and point guards are well represented in the top-175, but there's a huge drop-off for small forwards and centers. The average center's overall value is robust at 32.35 fantasy points per game, however, and we can flesh out the picture even more with this chart: 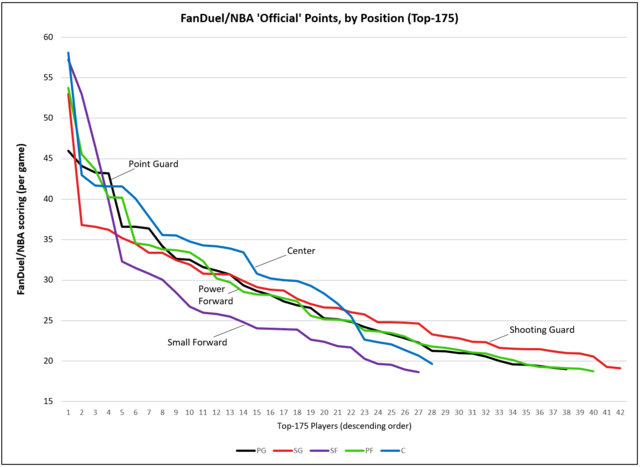 Just a glance makes it clear that small forwards are underperforming. Not only are they relatively scarce, with only 27 appearing in the top-175...they also drop off dramatically. Giannis Antetokounmpo, LeBron James, Kevin Durant and Paul George admirably lead the way, but the SF group is littered with inconsistent (to date) options like Dillon Brooks, Josh Richardson, Wilson Chandler and Jonathon Simmons. The eighth-most valuable SF this season has been Tobias Harris at 30.1 points. For comparison's sake, consider the eighth-most valuable players at other positions -- Dennis Schroder (34.2), Khris Middleton (33.4), Draymond Green (33.7) and Rudy Gobert (35.6).

Mike Gallagher has bored into DFS lineups for years, and as mentioned in today's podcast, SF tends to have a lot of 'punt plays'. That's the inevitable result of what we've seen above -- if you don't lock down an expensive stud, the odds are good you'll quickly find yourself betting on a guy like Trevor Ariza.

Other points to make related to the chart above...centers in the mid-range have been out-performing comparable players at other positions (e.g. the 14th-best center has been Dwight Howard at 33.4 fantasy points, who is well ahead of the 14th-best PG, SG, etc.). This is all contingent upon player's prices, matchups, injuries, and many other factors, of course...but knowing where to look for value is half the battle.

Here's one final meta-view look at values by position:

To nobody's surprise, small forwards are dead last in total value. Centers aren't far behind on a cumulative basis, owing to the small number represented in the top-175, but in a league like FanDuel (with only one center required), that means there are tons more options than you'll get at SF. The sheer volume and qualify of the SG group this year was a big surprise to me...compare the chart above to the same exact chart from last March, when SGs were at the bottom of the heap.

I'll conclude with a simple list of the top players, per game, in the NBA's official scoring system (through Nov. 14). If you have any questions or insights, feel free to email me or send a message on Twitter! Good luck this week.