Stats & Where to Find Them

This week's column examines statistical production since the All-Star break. We'll be looking at the top-200 players on a category-by-category basis, to identify outliers and late-season specialists. If you're in need of a boost in FG% and Montrezl Harrell is still on your waiver wire, go get him. Jakob Poeltl has been a shot-blocking machine lately (2.7 per game since the break), and for steals you might consider Kyle Anderson, Cory Joseph or even T.J. McConnell. In addition to those categories, we'll be discussing points, rebounds, assists, 3-pointers and weighted FT%.

The sample size here is very small, by necessity. Many player values have shifted dramatically since the All-Star break and we're looking for immediate production -- with the regular season winding down and fantasy playoffs upon us, this isn't the time to wax philosophical about 'upside'. Give me stats and give them to me now. If fluky games distort the numbers for some players, good or bad, so be it.

That said, I did eliminate anyone who hasn't played in at least four games since the break. There must be a cutoff somewhere and that didn't impact many relevant players -- Jimmy Butler, Danilo Gallinari, Eric Gordon, Ryan Anderson and a few dozen fantasy scrubs. For playing time, the cutoff was 15+ minutes played -- gone are Bam Adebayo, Boban Marjanovic and other bit players.

After running league averages and standard deviations for qualifying players, and assigning z-scores, I trimmed the population to the top-200 players (8-cat). This meant saying farewell to guys like Michael Kidd-Gilchrist, Courtney Lee, J.R. Smith, Jamal Crawford, Emmanuel Mudiay, Rodney Hood and Cristiano Felicio. Considering they didn't make the post-break top-200, it goes without saying that they're unowned in most leagues. If you're interested in viewing the entire top-200 with values for 8-cat & 9-cat, you can find my most recent spreadsheet here.

One glaring result is that Anthony Davis is lapping the field for overall value since the break. In those six games he's averaged 35.8 points (50.6% FGs, 87.7% FTs), 0.8 triples, 14.8 rebounds, 1.7 assists, 2.7 steals, 3.0 blocks and 2.5 turnovers. James Harden comes closest in 8-cat but even the Bearded One is way behind the red-hot AD recently...and Harden falls further if you include his voluminous turnovers (5.7 per game since the break).

Editor’s Note: With over 15,000 reviews, DRAFT is the highest rated fantasy sports app. For a limited time, DRAFT is giving Rotoworld readers a FREE entry into a real money draft and a Money-Back Guarantee up to $100! Here's the link.

The charts below are the core of the column and they speak for themselves, but I'll include a list of potential specialists and category-kings after each chart. Pay attention to the black trendlines for each chart, too. I've included them as a simple way to visualize the linear curve of these charts -- the steeper the slope, the more that category drops off as you progress from the top fantasy players to the low-end guys. Points plummet dramatically, for example, whereas FG%, FT% and 3-pointers are all much more gradual. The implication is that those categories are easier to find on the waiver wire, or at least outside the top-100. 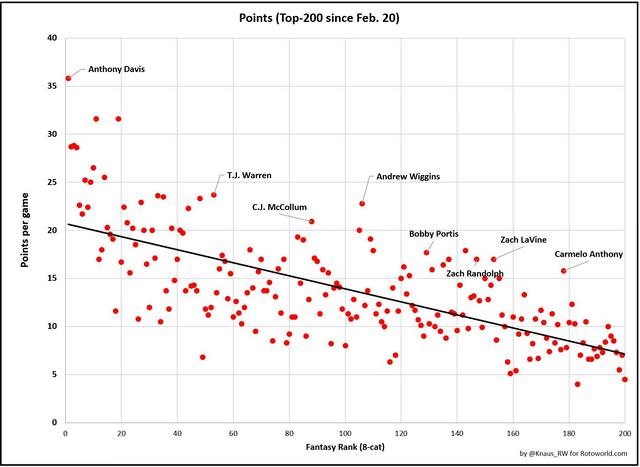 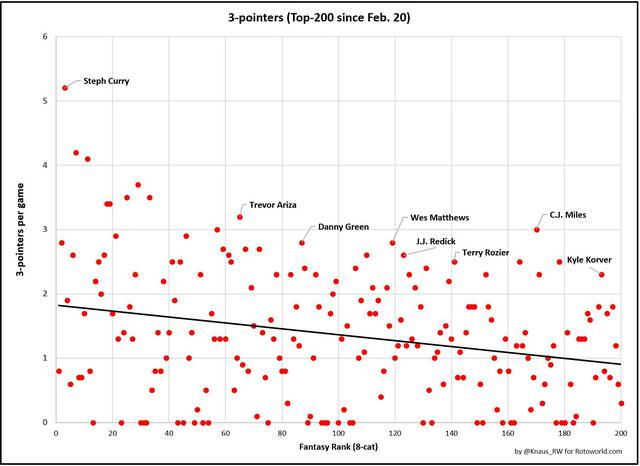 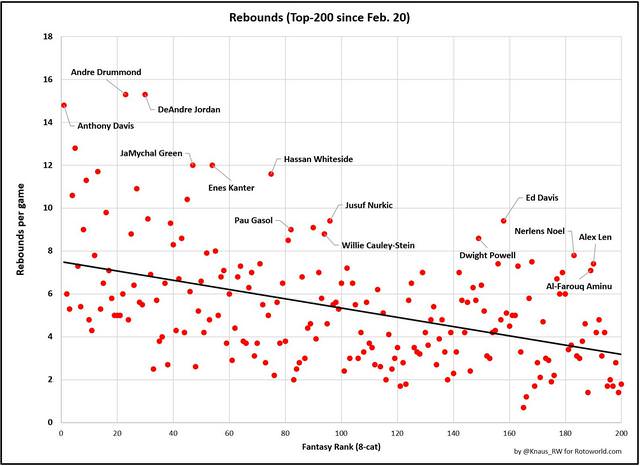 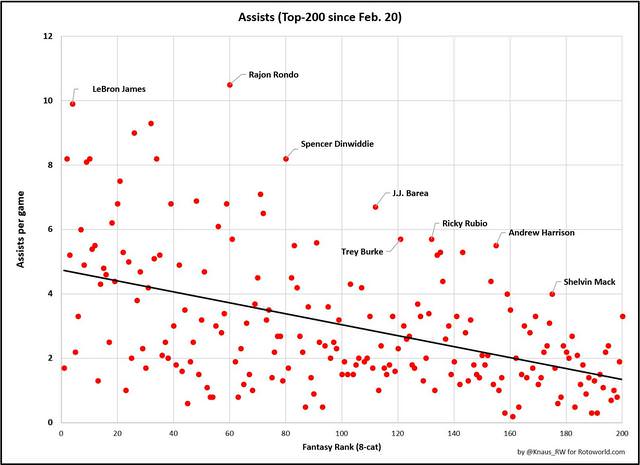 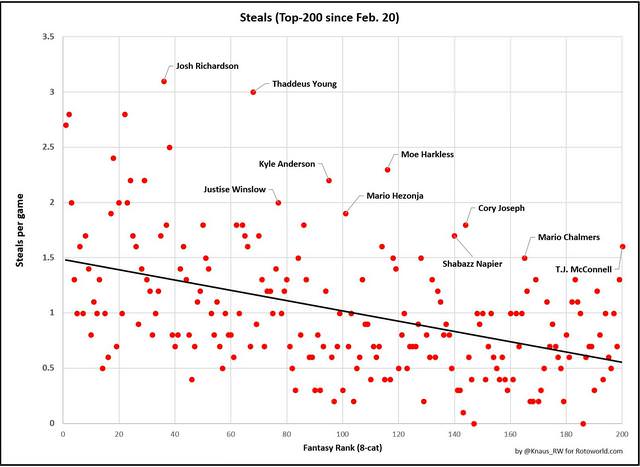 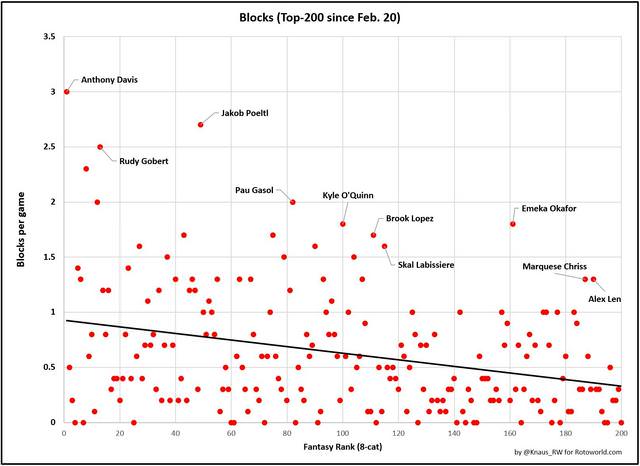 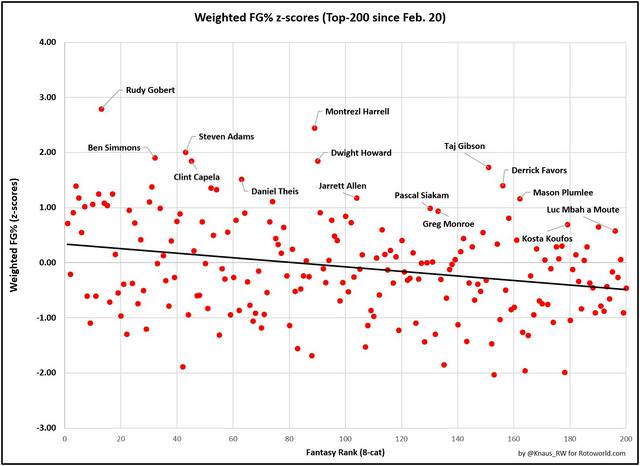 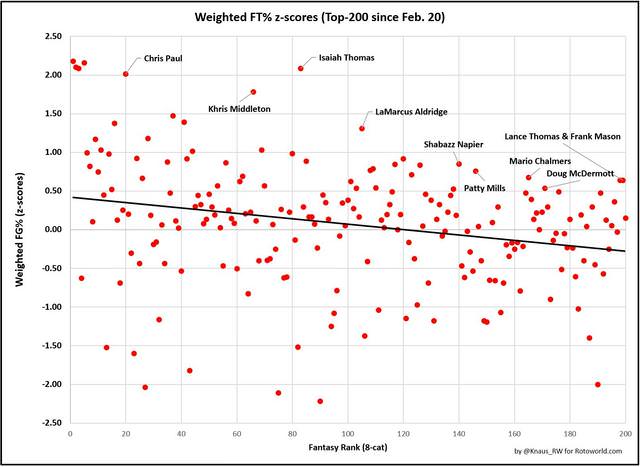 There's just one more reminder for today's Numbers Game...if you're interested in seeing top-200 values for 9-cat, 8-cat and by individual categories, follow this link to Google Sheets! You can peruse it at your leisure and/or download it via the 'File' tab up top. Enjoy!