In this column, we are going to find which college and NFL Combine statistics have been correlated to early NFL success, which I’m measuring using Pro Football Reference’s Approximate Value (AV) statistic. However, I’m only looking at the per game AV (AV/G) in NFL seasons two through four because rookie players often don’t perform and teams see the most return on their picks in the latter portion of their rookie contracts.

If you aren’t familiar with correlations here is a brief overview: The chart below will look complicated, but it’s really not. The left side of the chart is the college stats, and the top of the chart is the NFL stats. The darker the color (either green or red) the more correlated the two stats are. If there isn’t a lot of color in the cell, then the two stats have little to zero relationship. The numbers shown in the chart are correlation coefficients. If you want R-squared, just square the number. I chose correlation coefficients to show positive and negative correlations with color. Here’s a short video if you’re confused. 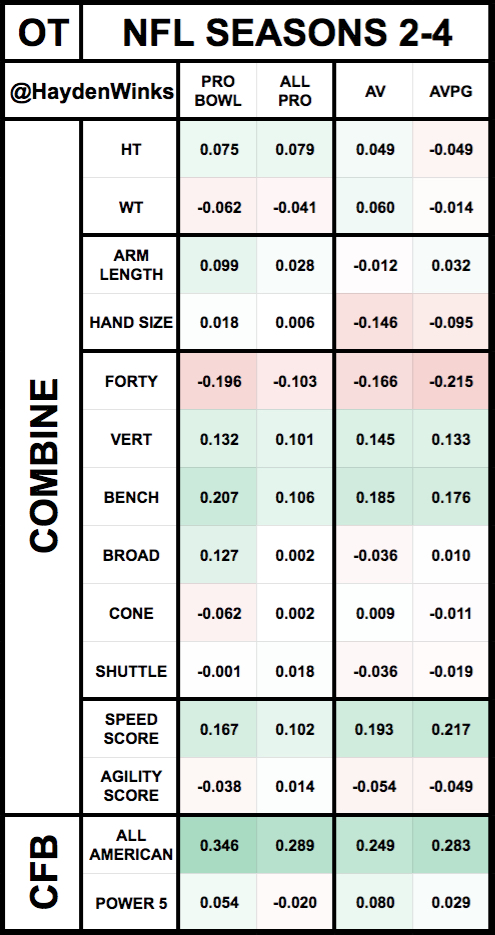 I’m not so sure that using correlations are the best way to view these metrics. As Josh Norris noted, there are certain minimum thresholds that have held significant weight. Norris specifically mentions cone drill thresholds as something he uses in his evaluation. So while the cone drill hasn’t been correlated to early NFL success, there are still ways to use the data point. It just takes some creativity.

If we want to take a more stubborn look at this, then speed appears to be the most important NFL Combine measure. That can be with the 40-yard dash or with Speed Score, which accounts for size. The other two tests are the vertical jump -- that’s correlated to speed -- and the bench press. Most other positions in football don’t require a ton of chest strength, thus they haven’t been correlated to success at other positions. But chest strength is obviously crucial in the trenches.

But the best metric here is if an offensive tackle was an All American. Duhhhh. I’m sure this would be the case if I did this with other positions, but it’s obviously important for offensive tackle. However, I theorize that All American tackles are overdrafted, which would take away the advantage of knowing this statistic. But let’s get back to where all the data is -- At the NFL Combine. 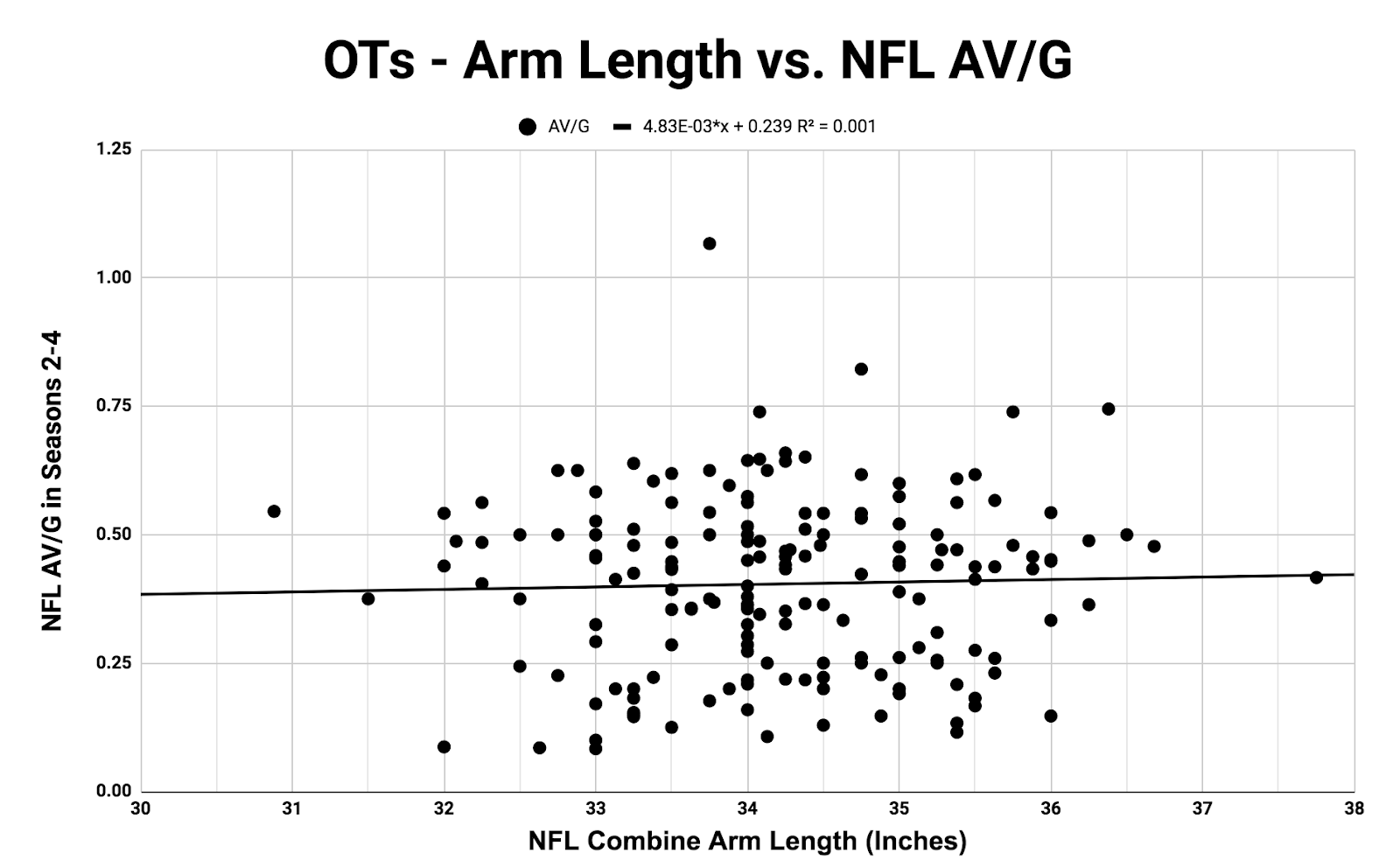 Arm length is always the talk of the Combine when it comes to offensive tackle, and I’m struggling to see why. Even if the purpose is to find a minimum arm length, there’s really not an exact minimum to pull from. I suppose we can say 32 inches is the cutoff, but the hit rate for offensive tackles between 32 and 33 inches is pretty strong. 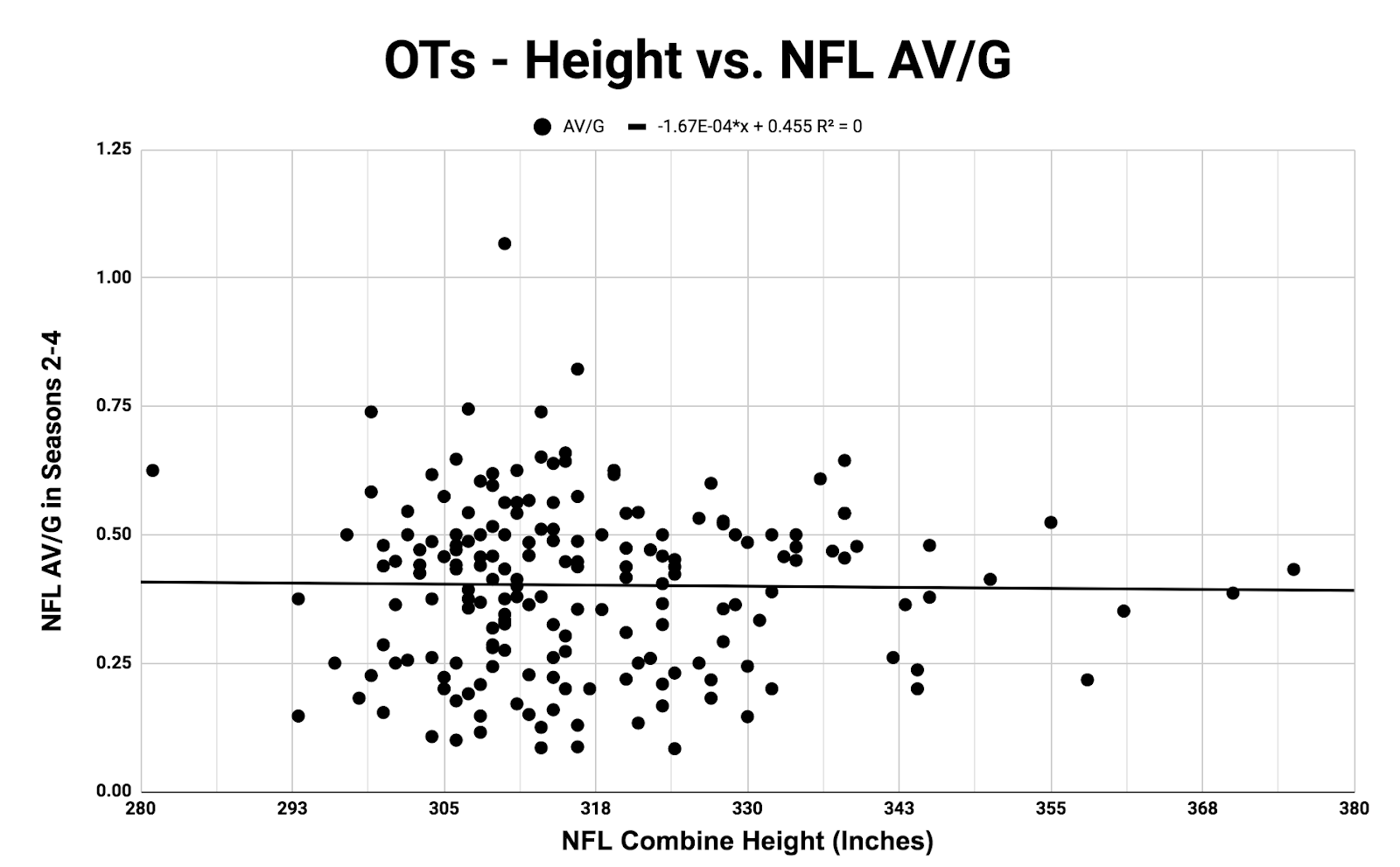 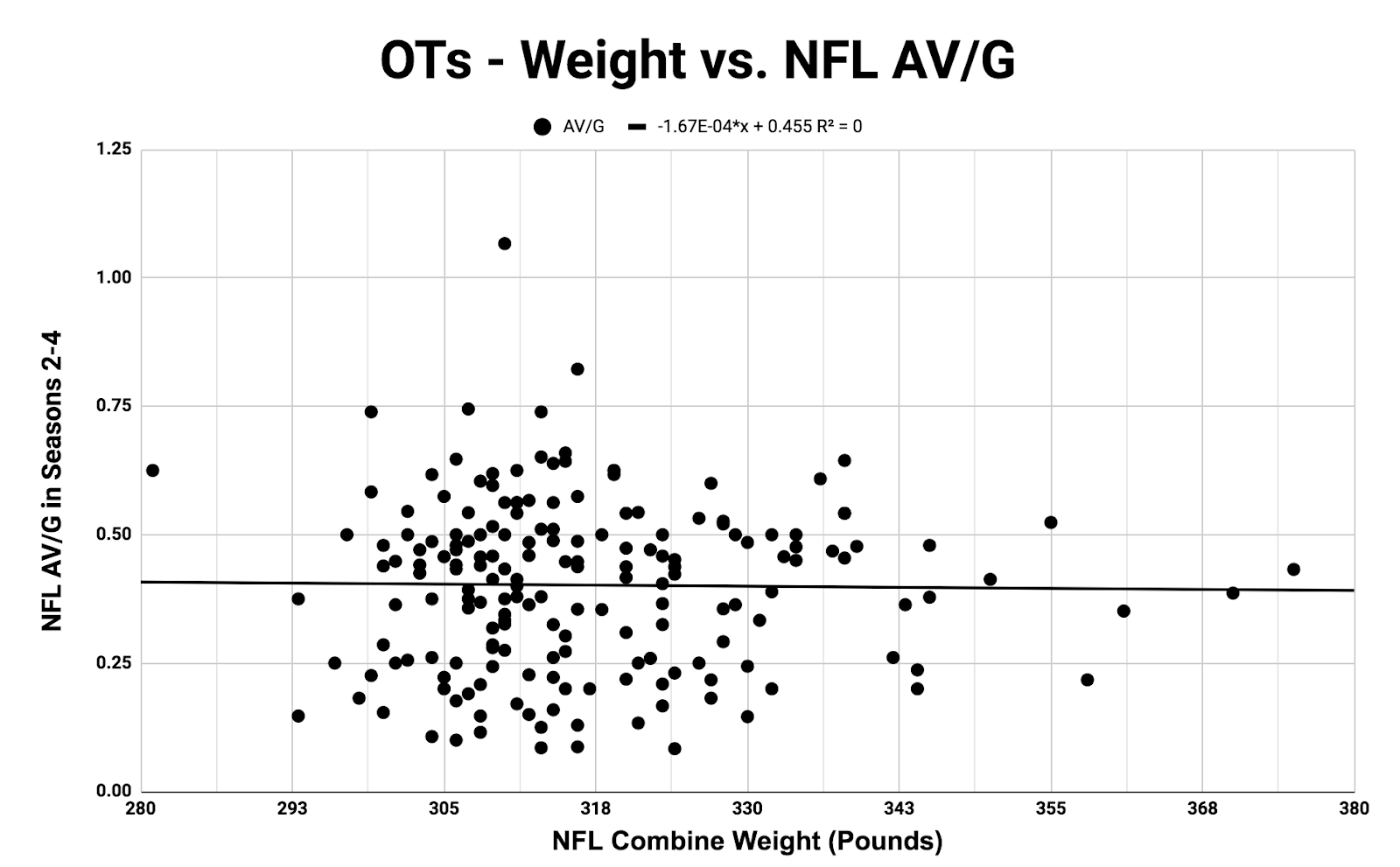 Height and weight literally both have zero correlation to early NFL success, and it’s hard to find minimum cutoffs as well. By itself, size doesn’t matter, but we can pair size with NFL Combine testing results to help out the evaluation. 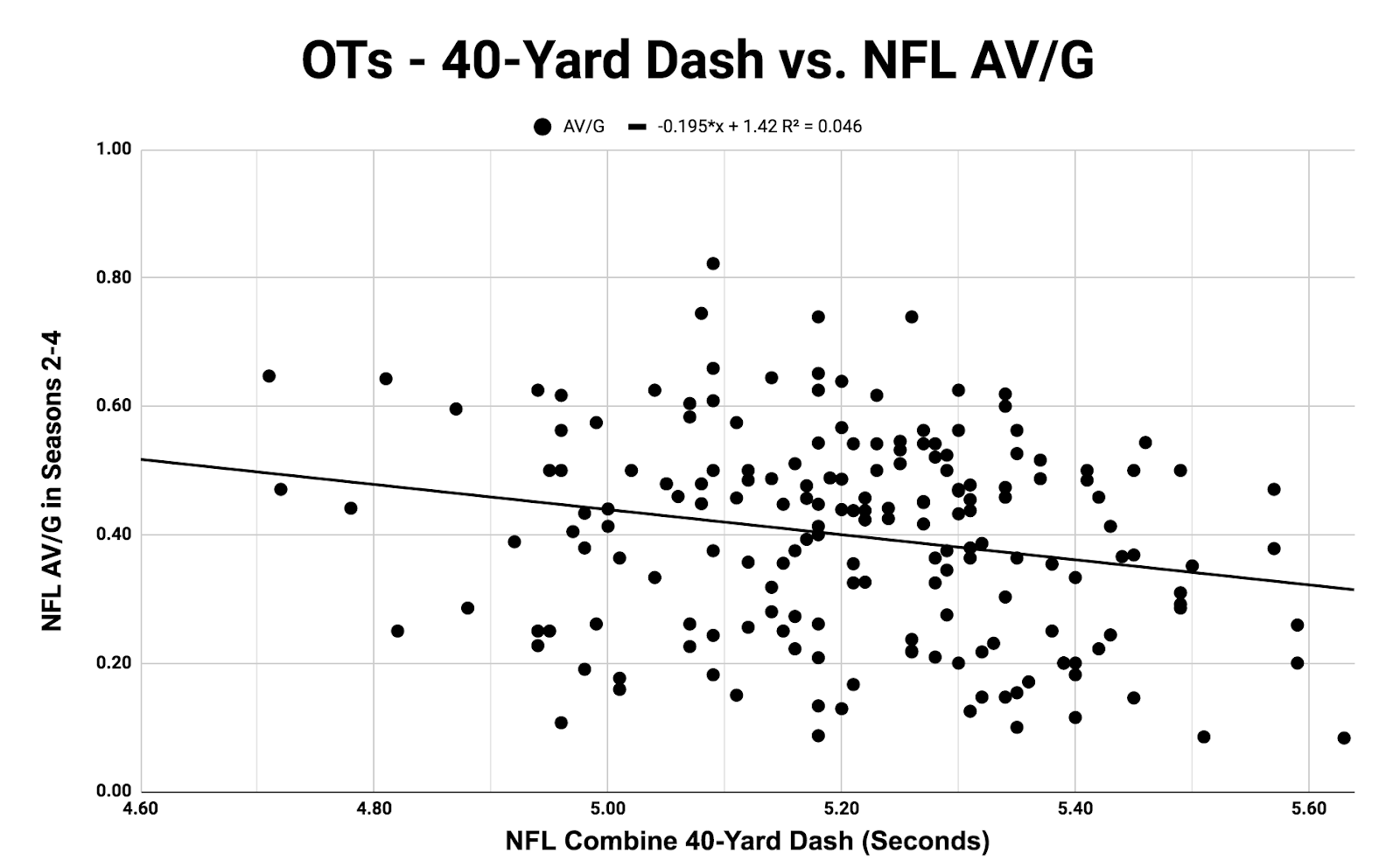 This is a little better than the size graphs we looked at. Being fast, even as a lineman, is crucial and I think it’s fair to say that running over 5.40 seconds has put a ceiling on the upside of an offensive tackle. 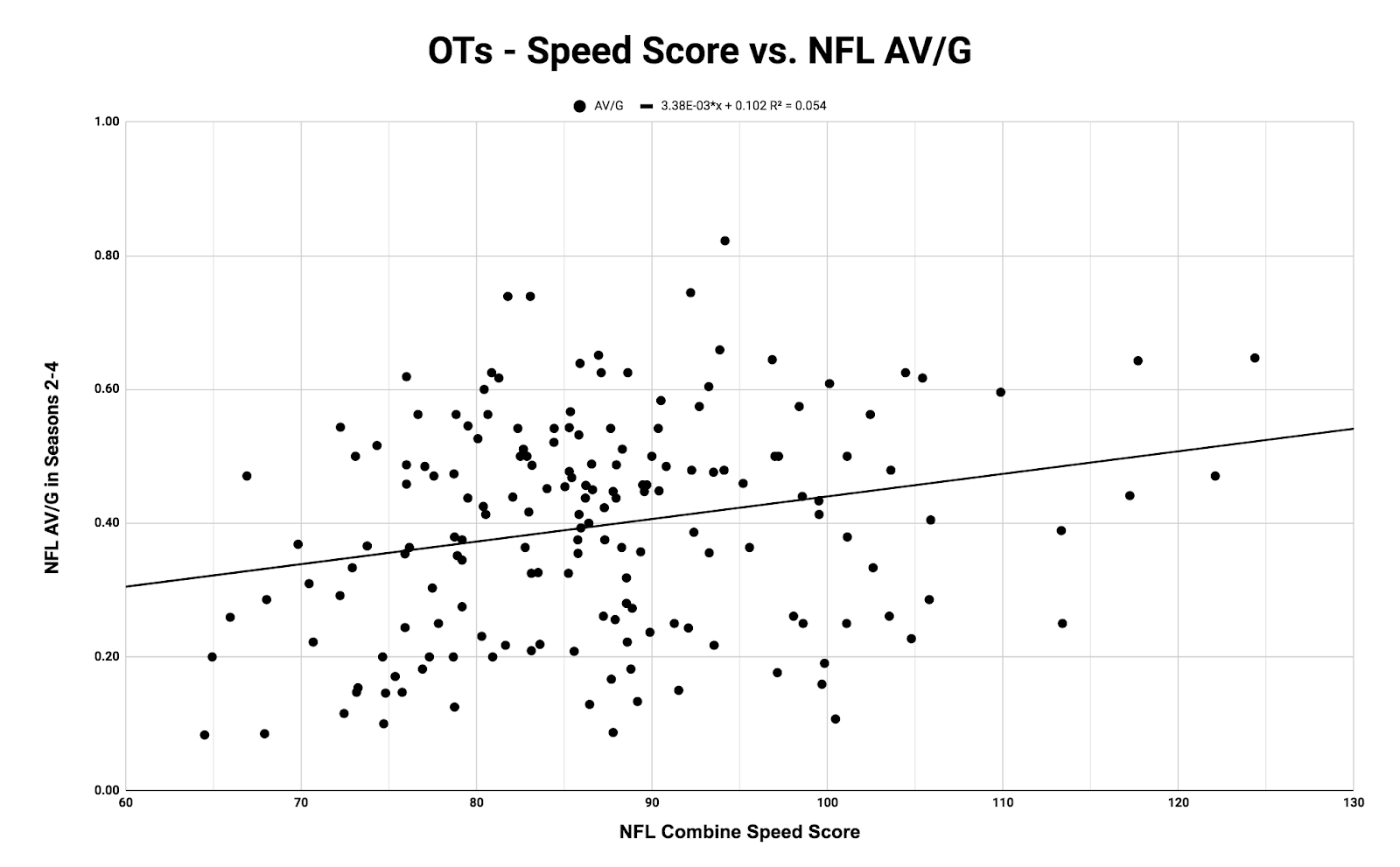 Now we are talking. If an offensive tackle clears that 90 Speed Score mark, you’ve got my attention. If an OT gets over 100, then I’m really clearing time to watch his tape. But there’s also a takeaway on the other side of the graph. If an OT fails to get to even 70, then we have to severely ding his overall grade. We should probably lower the grade for an OT between 70-80 as well. 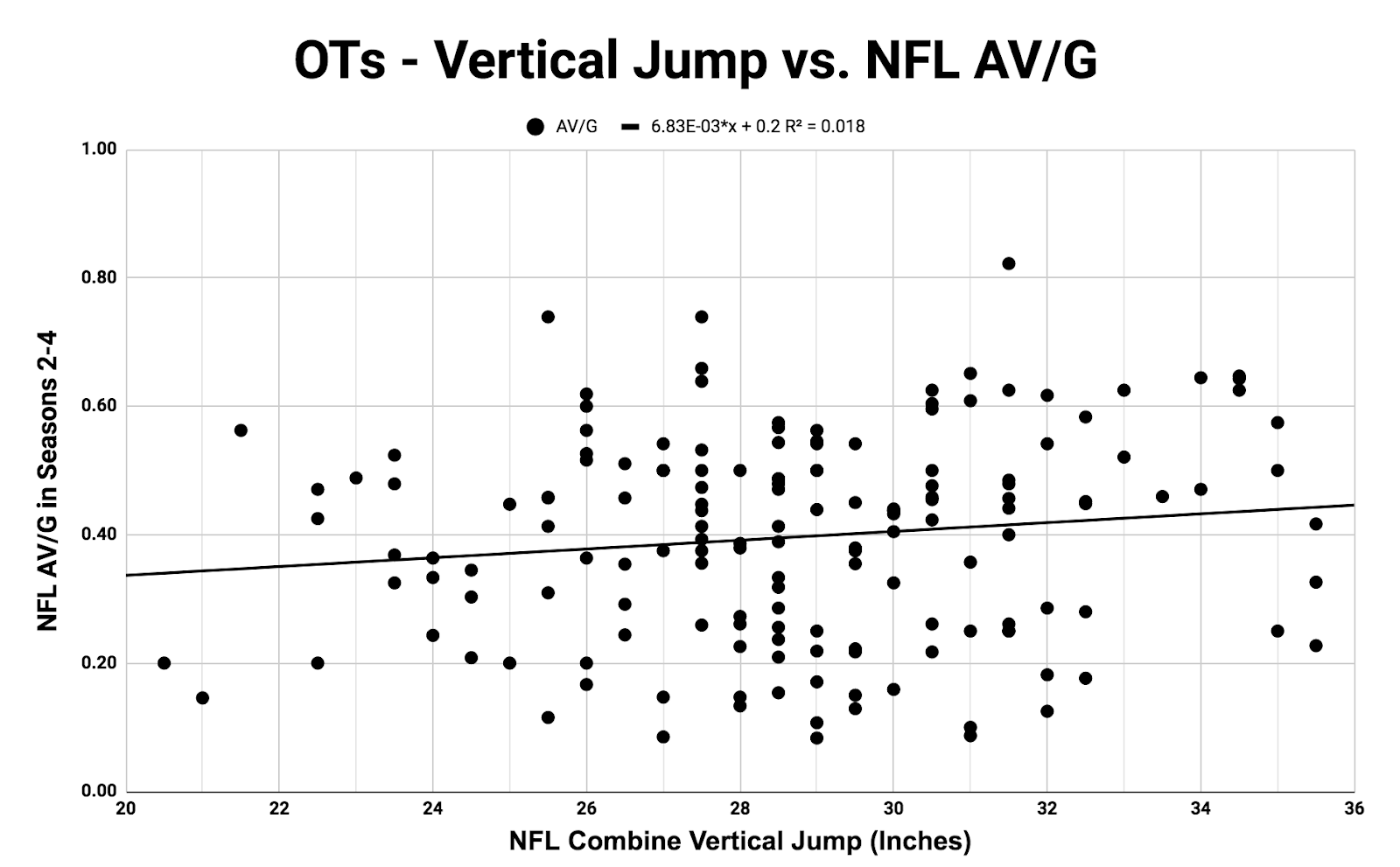 The success rate among offensive tackles with a vertical jump of over 33 inches is amazing. 16 of the 19 offensive tackles in my database to hit the 33-inch mark averaged at least 0.40 AV/G in the NFL, which is on par with a low-end starter. This group also had a higher rate of reaching high-end starter with 5-of-19 averaging 0.60 AV/G.