Getty Images
By The Numbers

The mission of this column is to find what parts of an NFL prospect’s profile that actually matter. Does a wide receiver’s college receiving yards per game matter to overall success? What about just for his NFL YPT? Has the 40-yard dash been correlated to NFL PPR fantasy points? The list goes on and on, but this column will answer a lot of those questions. 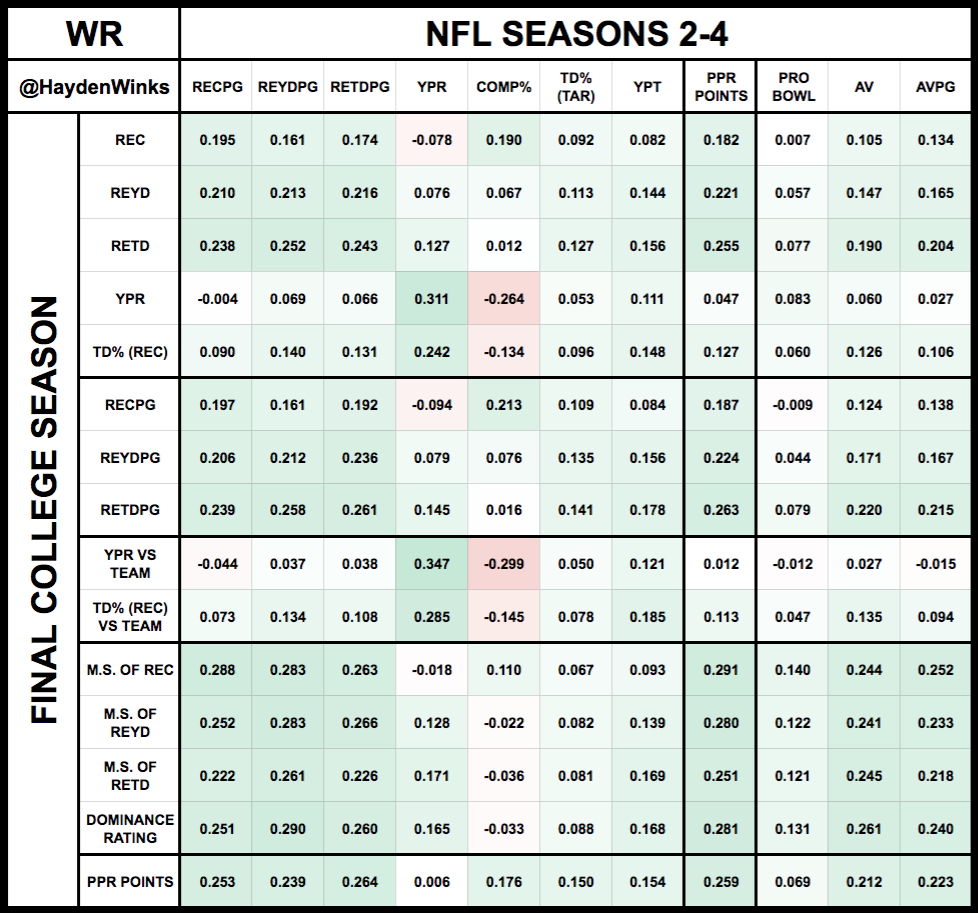 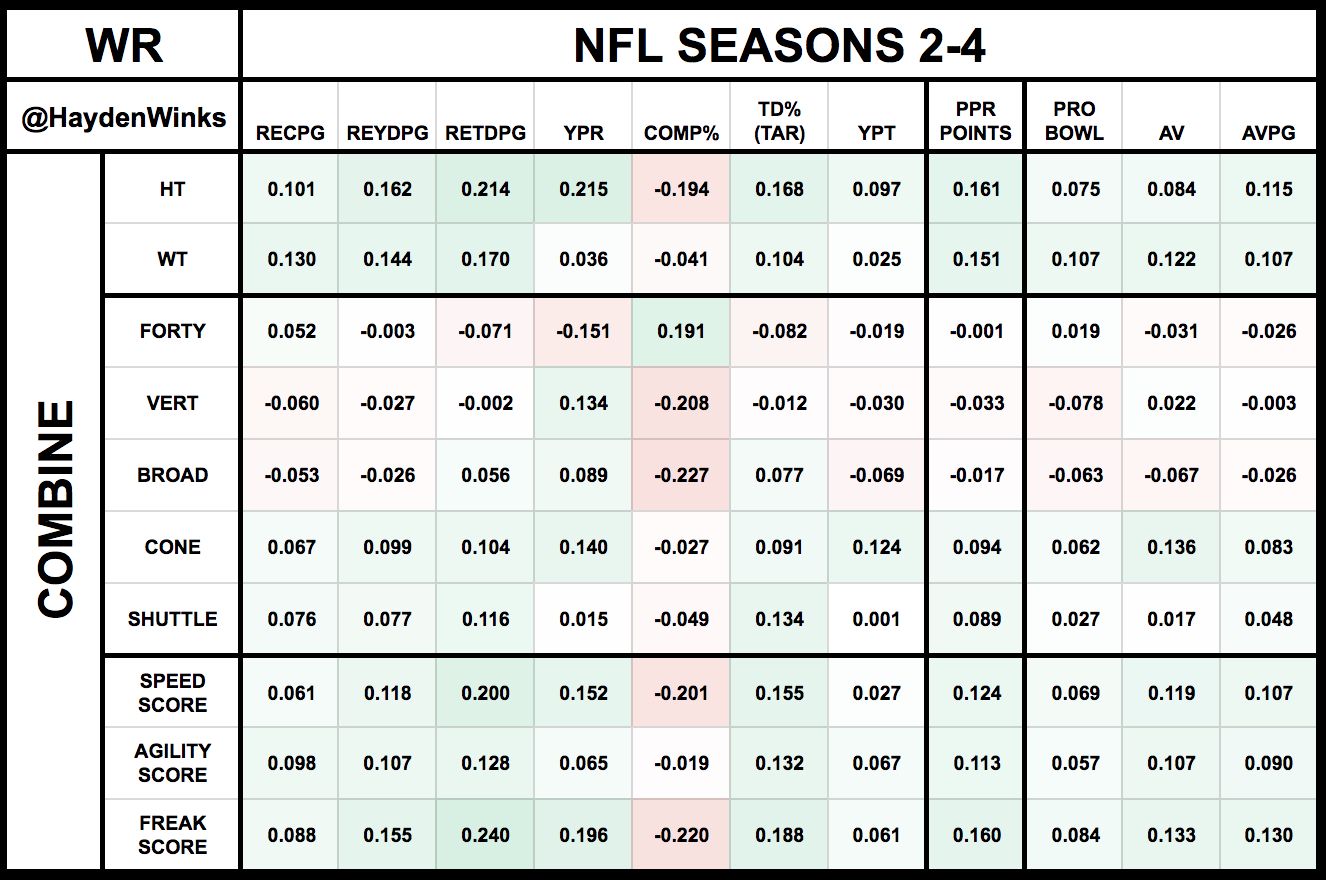 Statistics that have historically NOT been correlated to early NFL success (AV/G) for WRs:

Statistics that have historically been correlated to early NFL success (AV/G) for WRs:

Yikes. These stats just aren’t very correlated to early NFL success, well at least for approximate value per game. However, they are a little better at predicting PPR fantasy points, but the metrics still only explain about 5-10% of variations in NFL PPR fantasy points if you’re using the final college season, but there are other ways to get better results (age-adjusted seasons, career, etc.) that I’ll get to in a future column.

As has been the case with quarterbacks and running backs, college fantasy points are high on the list. I hope this is enough evidence for you to start reading my weekly CFB DFS articles. In fact, all of this research was just a big ploy for you to play college football DFS. 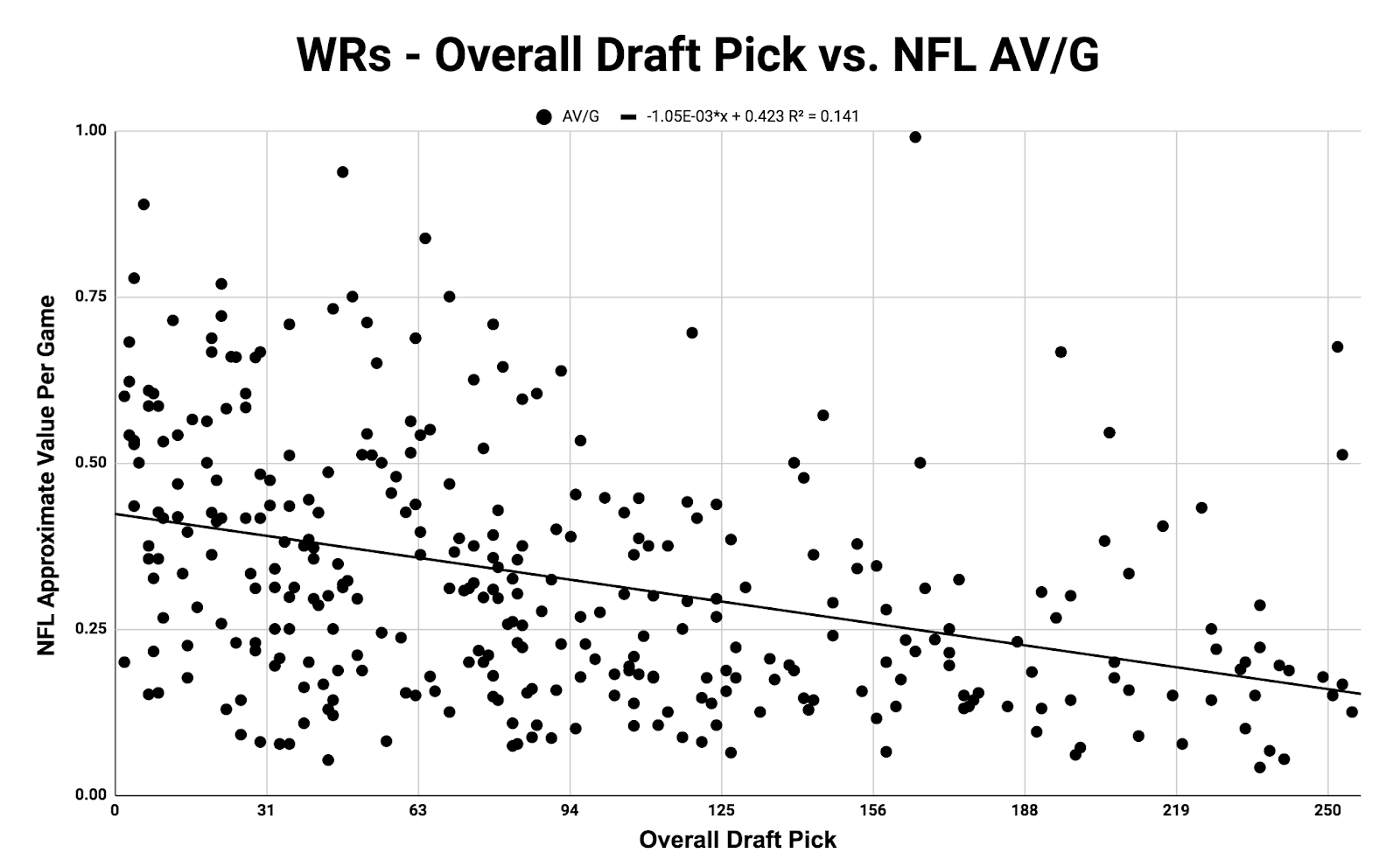 The NFL Draft has not been great at evaluating wide receivers relative to other positions. The r-squared for the position is only 0.14, meaning that only 14% of the variation in early NFL success for wide receivers can be explained by the overall draft pick. That’s not very good, but I’m expecting this number to improve with college football analytics starting to improve.

I theorize that the newest college football metrics will be better than what we currently have. For example, some of the stats in my 2019 NFL Draft WR Stats Report don’t have historical data, so we can’t measure correlation yet. But marginal efficiency/explosion, YPT vs. teammates, and other per-play metrics should outperform the current metrics that have historical data. So I’m using those data points as a part of my evaluation even if I don’t have proof that they are meaningful.

But if you want to build models that have historical data, I’ve found that market share -- specifically per game market share -- and college PPR fantasy points have been the most correlated to early NFL success for receivers. On the other hand, the NFL Combine has been little to zero correlation, meaning that it’s smart to buy-low on receivers who did mediocre (not terrible) at the combine.

On the next page, we will get away from overall early NFL success and look at what’s correlated to individual statistics like fantasy points, receiving yards, receiving touchdowns, catch rate, and YPT. There are some interesting findings when we begin to plot these data points on graphs. Join me!

Data notes: The wide receivers sampled (n=325) met the following requirements: Had a total Approximate Value of at least 2.0 during NFL seasons two through four and were drafted between the year 2000-2017. Some of these wide receivers that qualified didn’t play in the FBS, so their college statistics were omitted but I kept them in the sample while researching the NFL Combine. It’s up to you if you want to extrapolate these college production/efficiency findings to the FCS level. Also, not every wide receiver participated in the NFL Combine, but the sample (n=281 for the 40-yard dash) is large enough to take these NFL Combine results seriously. The reason I choose the year 2000 was to keep the sample large enough to have reasonable results, but not too far away from “Today’s NFL” that is vastly different than the 1980s. Lastly, since this sample is looking at NFL seasons two through four, it’s up to you to extrapolate these findings to projected rookie seasons and seasons coming after the rookie contract. I’d guess that the data would change marginally, but the major takeaways would more-or-less stay the same. … In order to establish a baseline for what “NFL success” is, I’ve decided to use Pro Football Reference’s Approximate Value statistic. While not perfect, it’s a good enough metric for the column (and it will help me analyze all positions, which will ultimately let me produce an Analytics Top-300 Big Board). If you aren’t familiar with approximate value per game (AV/G), here is how the top 2018 NFL WRs finished in AV. In general, the NFL-caliber starters have an AV/G of 0.50, and the studs are above 0.75 AV/G. Knowing this will help you as you scan the charts on Page 2 and 3.

Before you look at all the data below, remember that the sample is looking at NFL seasons two through four. This isn’t analyzing entire NFL careers. This is just designed to find the best running backs for their rookie contracts. It’s up to you if you want to extrapolate the data to either rookie seasons or seasons after the rookie contract. I’m guessing the data would be pretty similar, but the exact correlations would be slightly different.

Which stats have mattered for PPR fantasy points for wide receivers? 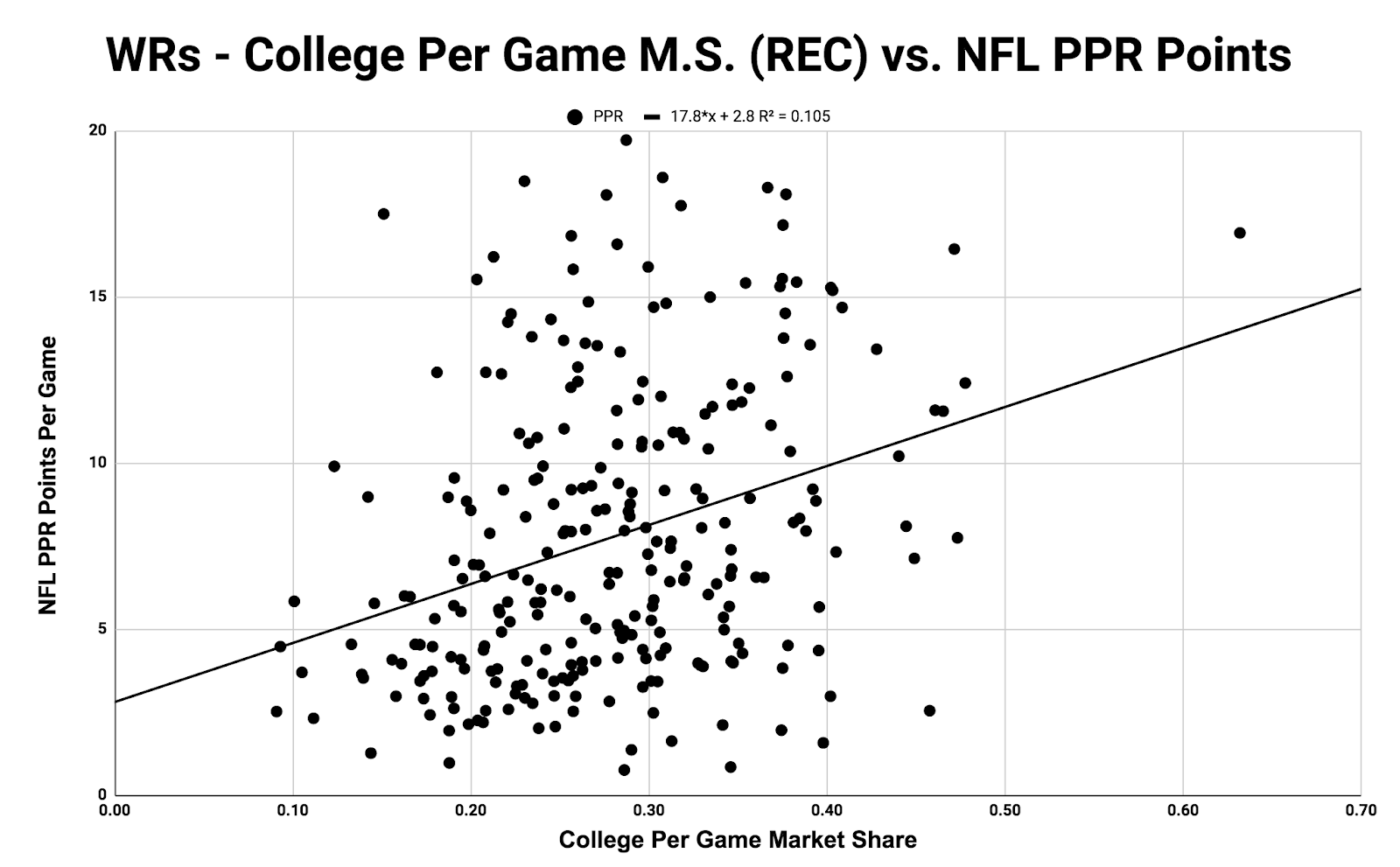 For reference: The NFL Draft has an R-squared of 0.16, so the draft has been bad too.

If you are looking for an even deeper understanding of what’s important for predicting fantasy points, you absolutely need to read this Kevin Cole piece from a couple years ago and follow Peter Howard on Twitter (@Pahowdy). They are both market share truthers like myself. If you play dynasty football and don’t digest everything they produce, you are better off burning your money so you can at least stay warm.

How should we evaluate wide receivers who missed multiple games? (Read: “Is D.K. Metcalf actually good?”)

Like I said before, some of the best NFL Draft research has pointed to market share -- the percentage of a team’s receptions, yards, or touchdowns that went to an individual player -- as the best predictor of NFL success for wide receivers, and my research agrees with that. But I’ve found that using per game market share -- a player’s per game numbers divided by his team’s per game numbers -- has been slightly more correlated to a majority of the NFL receiving stats. Take a look at the marginal differences between the traditional and per game versions of market share: 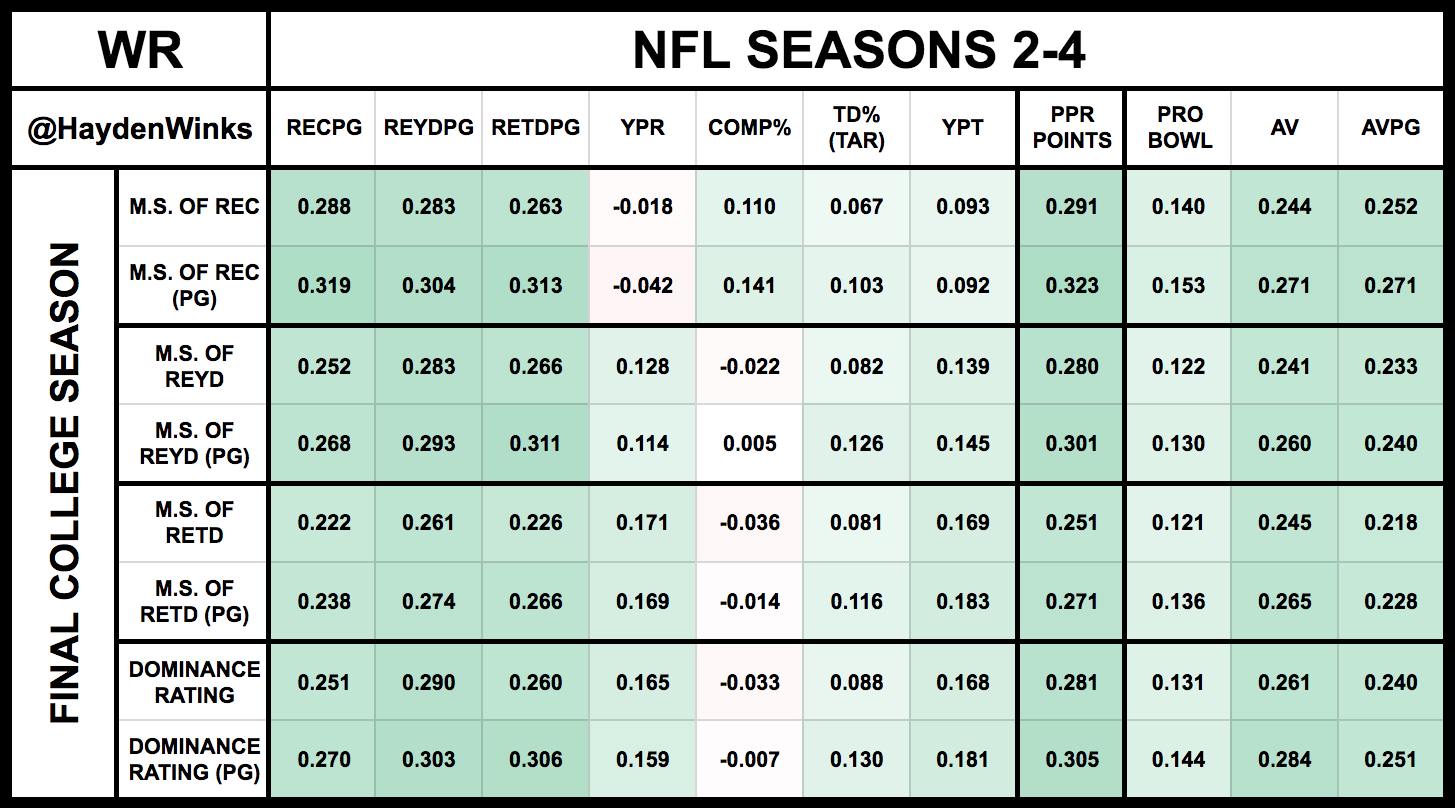 There are a couple of examples from this year’s draft class that fall into this category, mainly Ole Miss’ D.K. Metcalf and Missouri’s Emanuel Hall. Both players only played in seven games in 2018 -- Metcalf really only played in six -- so traditional market share users would have these players way below consensus. However, if we use per game market share data, then both players aren’t affected by the missed time. Here’s the difference between the two:

The differences between the two are pretty drastic, and it’s possible that’s the difference between whiffing on a prospect and not. I was bullish on Emanuel Hall in the WR Stats Report, in part to his big 42% market share of yards and 39% market share of touchdowns. If we were using traditional market share, Hall would score much lower. But the real debate in the community has been with D.K. Metcalf, but I find it kind of silly. Metcalf doesn’t have the best market share even when we use the per game version, but his 27% yardage passes most thresholds you can come up with, while his 46% market share of touchdowns tests well. Also, Metcalf also was very good on a per target basis:

Per target numbers were good:

So I think it’s best to side with #FilmGrinders and believe in Metcalf as a prospect (assuming medicals are clean) because there are statistics to back up the strong opinions held by All-22 nerds.

What else can we say about on-field college stats for wide receivers? 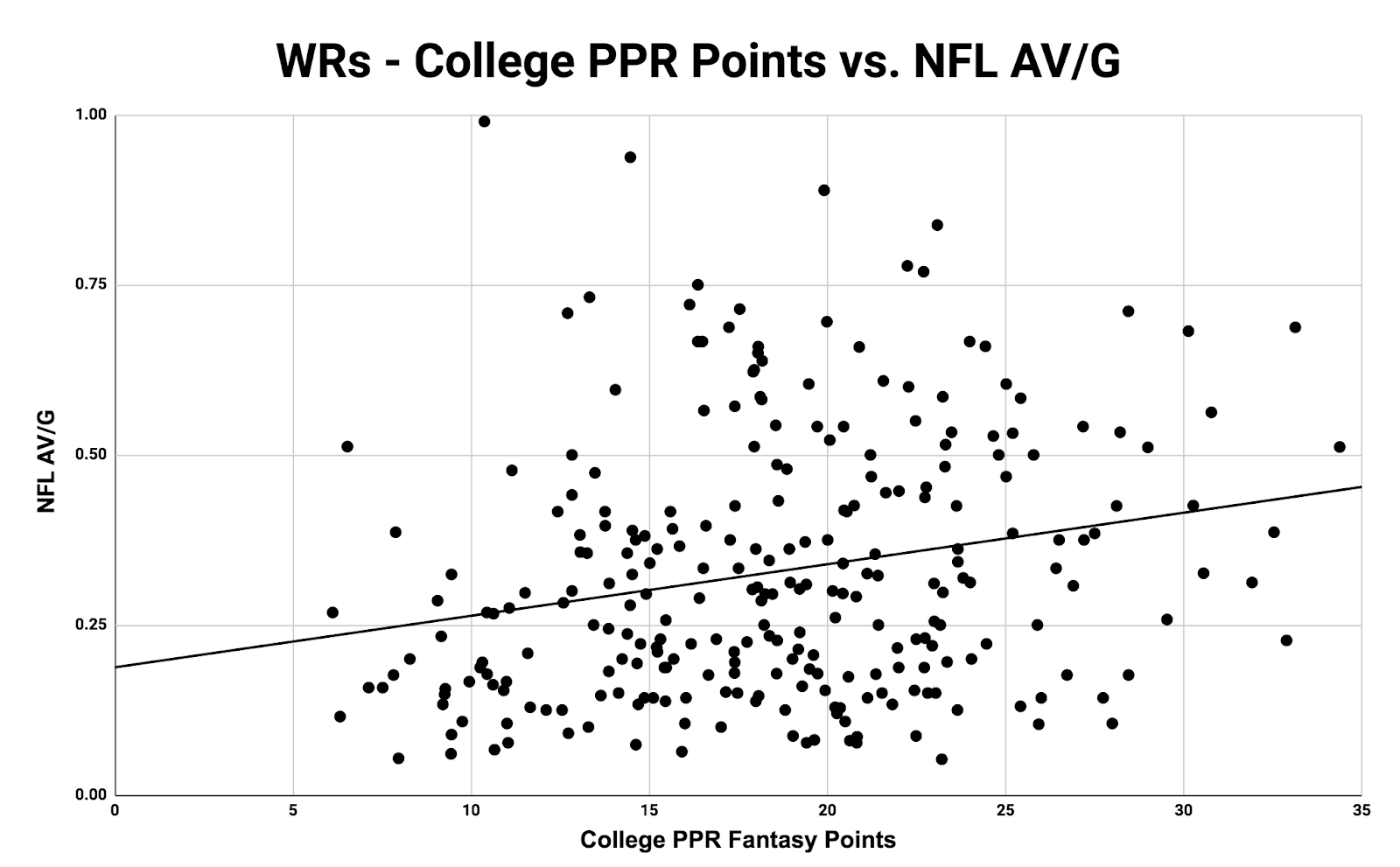 College PPR fantasy points were the most correlated stat to NFL success for running backs, and it’s No. 4 at receiver. Analysts grinding these college fantasy football streets have an edge in evaluating these prospects, which is good news for people who read my weekly CFB DFS columns. 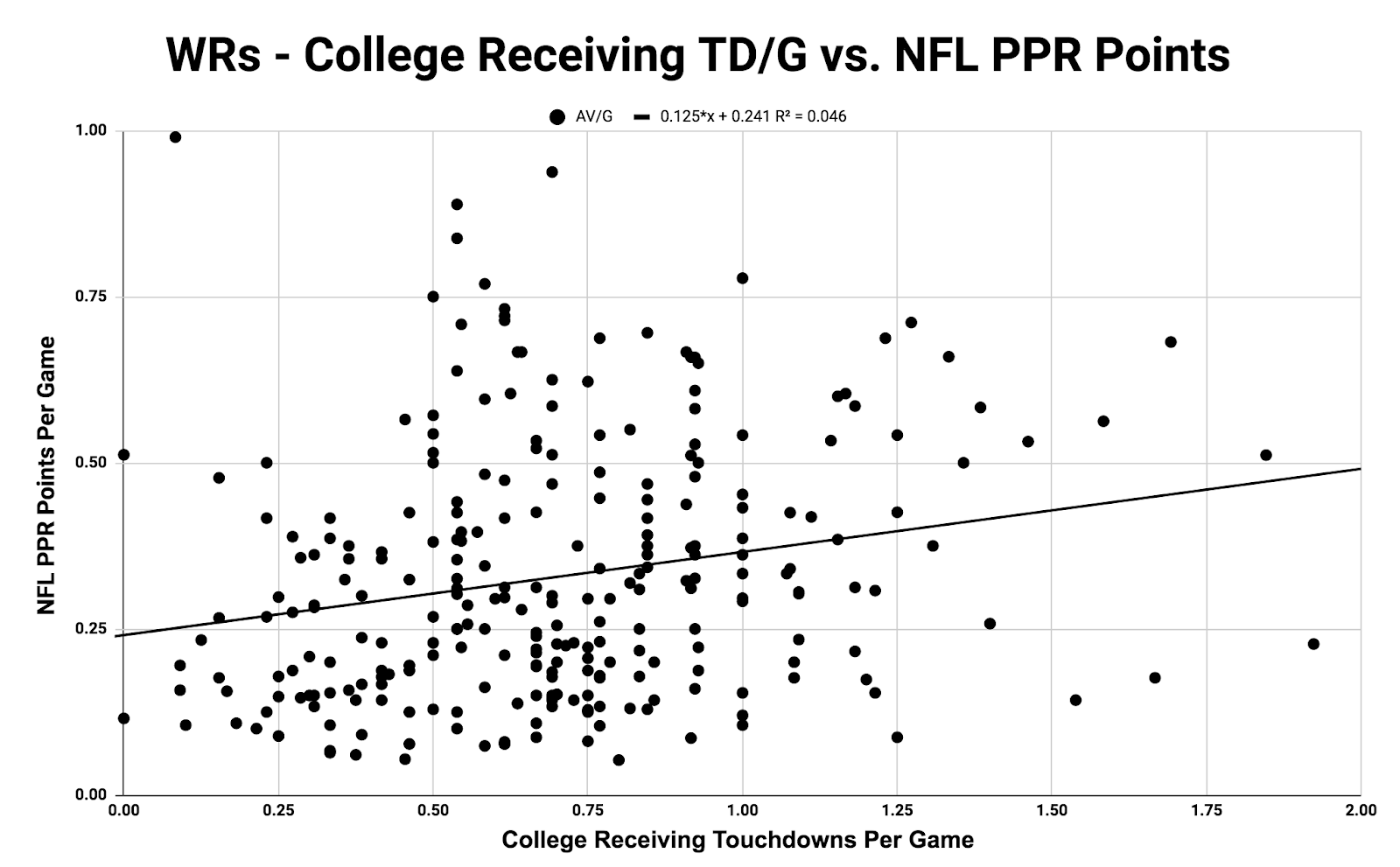 When it comes to the regular box-score stats, the touchdown metrics were more correlated to early NFL success than the yardage metrics; Receiving touchdowns per game beat out receiving yards per game, and total touchdowns beat out total yards. 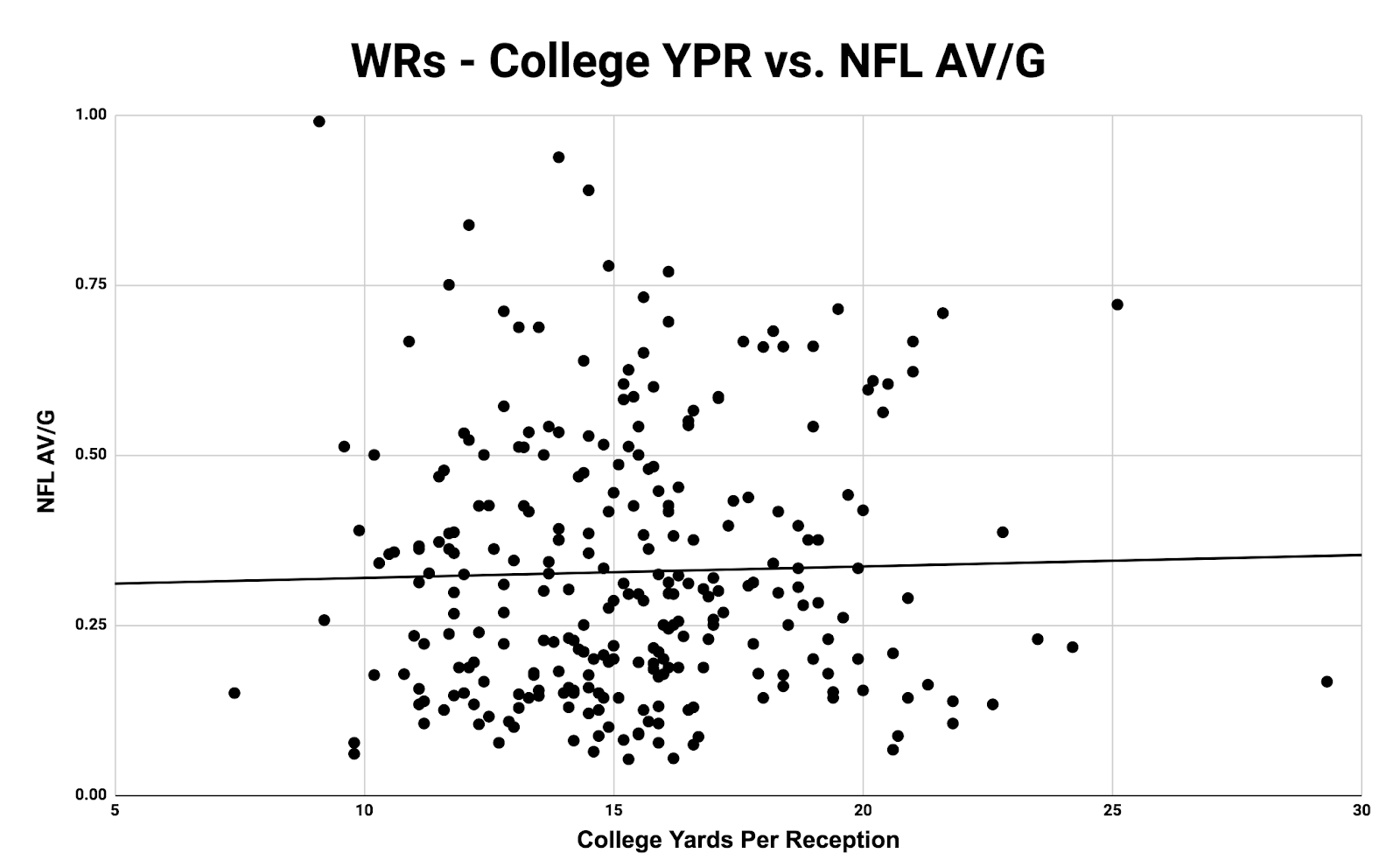 Yards per reception has zero correlation to early NFL success. I wish I had historically target data because I theorize that yards per target would be more correlated than YPR. Luckily, I have this year’s YPT data and you can take a look at it in the WR Stats Report, or just look at my old tweet (not all bowl data included).

What should I look for during the NFL Combine for wide receivers? 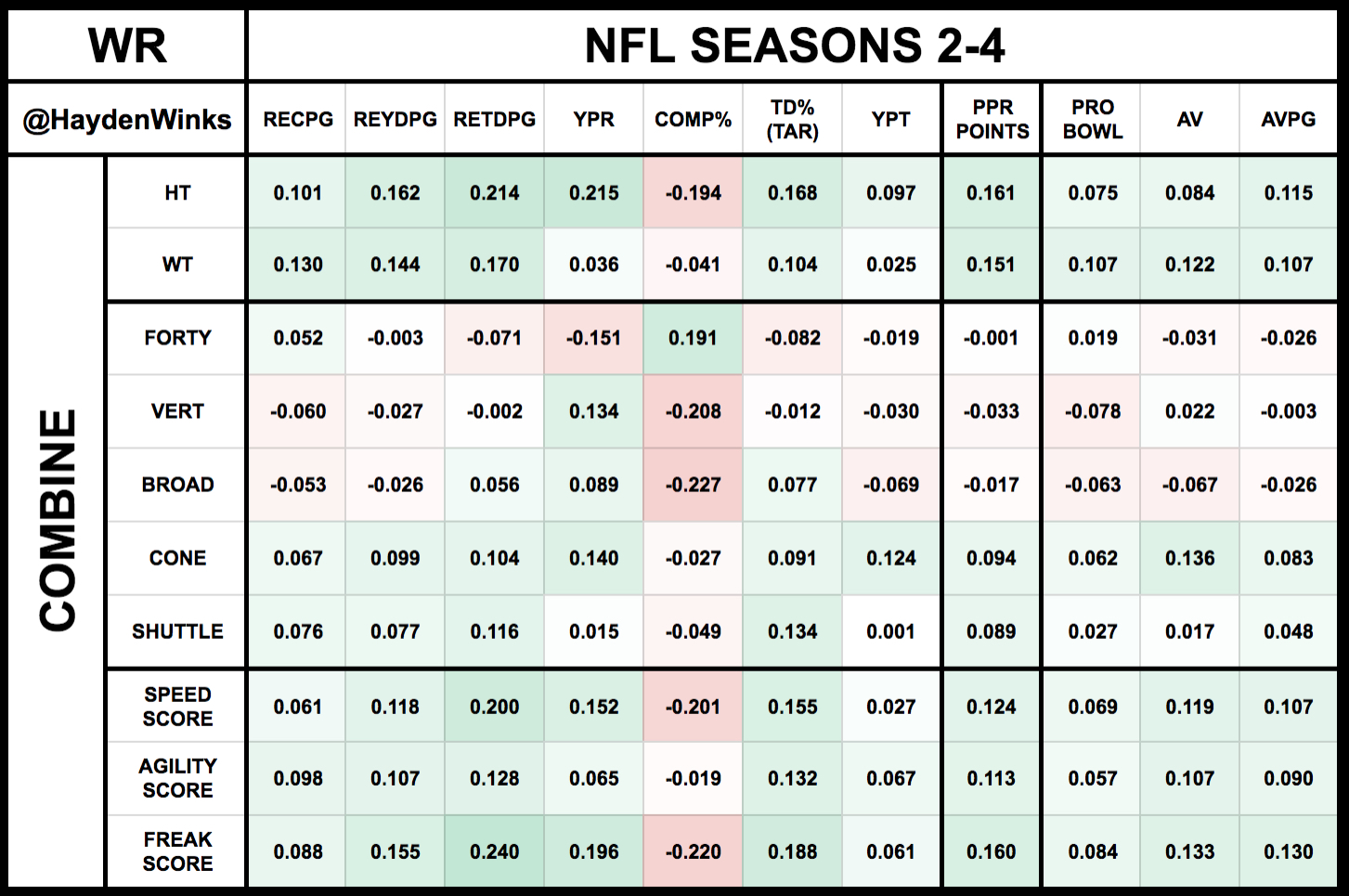 Of course, it’s always better to run faster or jump higher, but there hasn’t been a single test that’s been correlated to early NFL success. Instead, I’d pay more attention to the size-adjusted metrics like Freak Score and Speed Score. 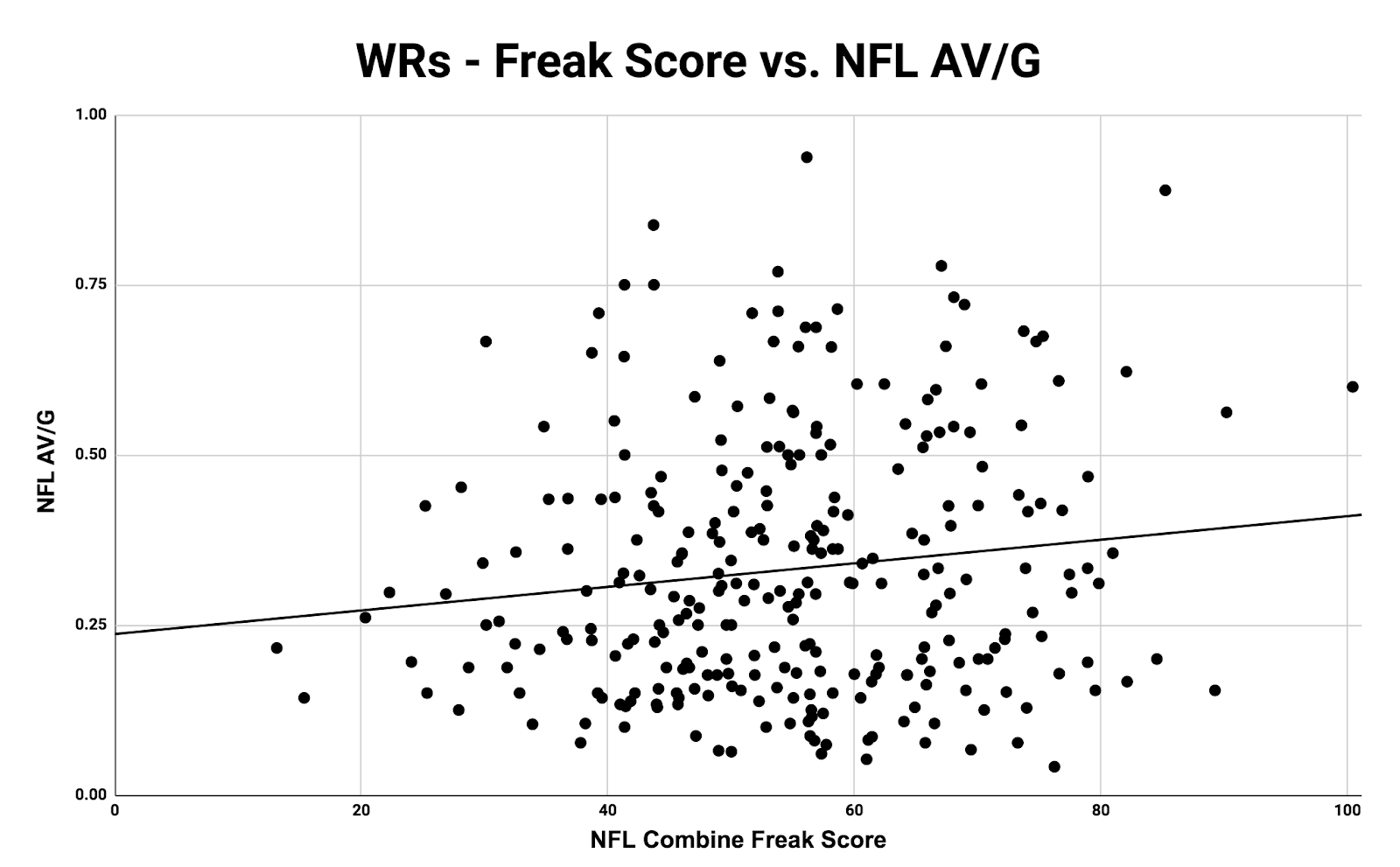 As you can see, there’s a pretty clear minimum threshold somewhere between 30 and 40. In fact, only four of the 36 receivers (11%) who had a freak score below 40 met my NFL-caliber starter threshold of 0.50 AV/G. I’ll be tracking those results for this year’s draft class in a future column and on Twitter (@HaydenWinks).

Can we dig a little deeper into the NFL Combine stats? 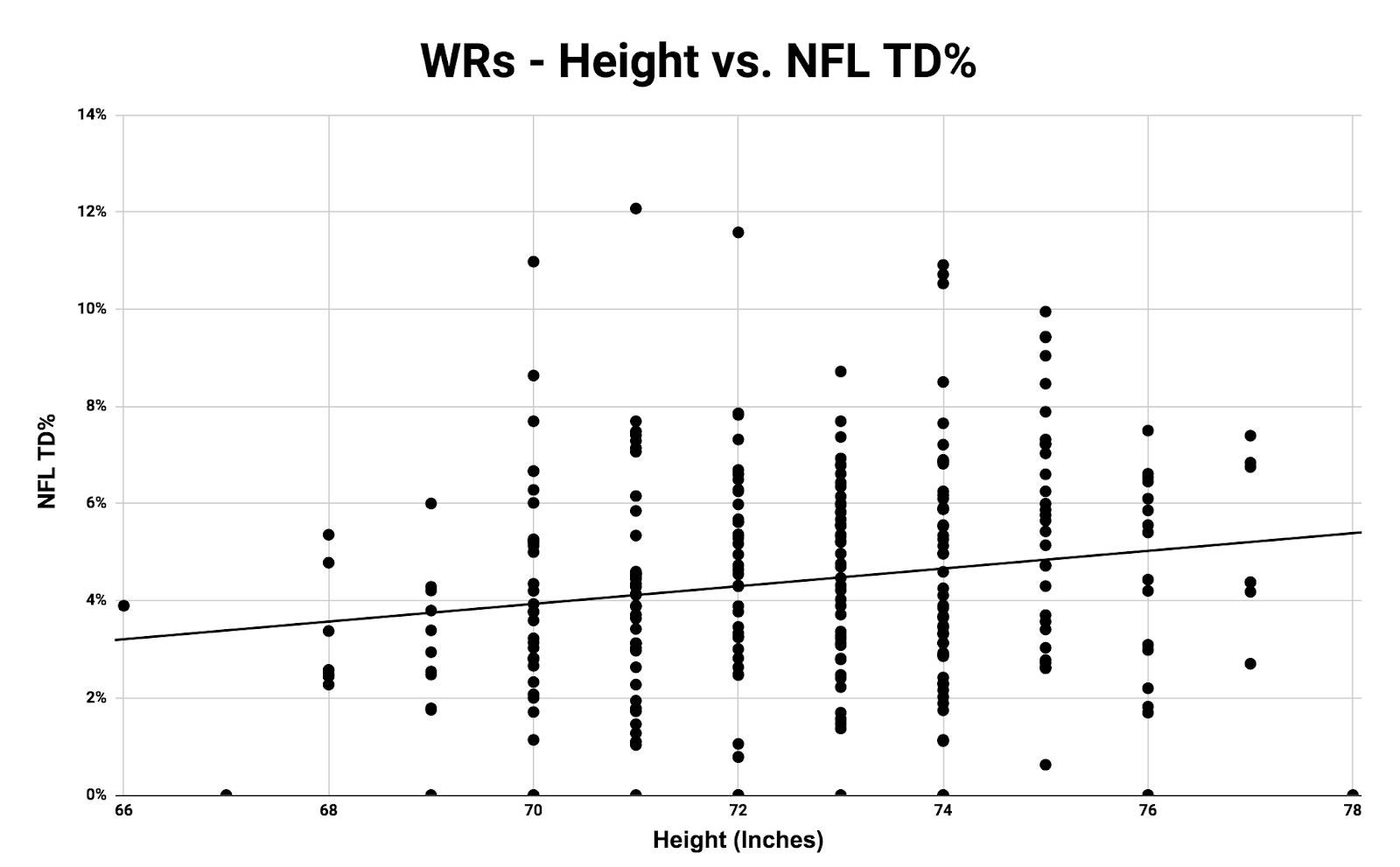 There’s basically zero correlation here, but we can take a look at some minimum thresholds. Only one receiver that measured under 5-foot-10 has eclipsed the 6% touchdown rate in NFL seasons two through four and they average a 3.0% TD rate. It also appears that the 74-75 inch range is where the sweet spot is (5% TD rate average), but remember that there is really zero correlation here. 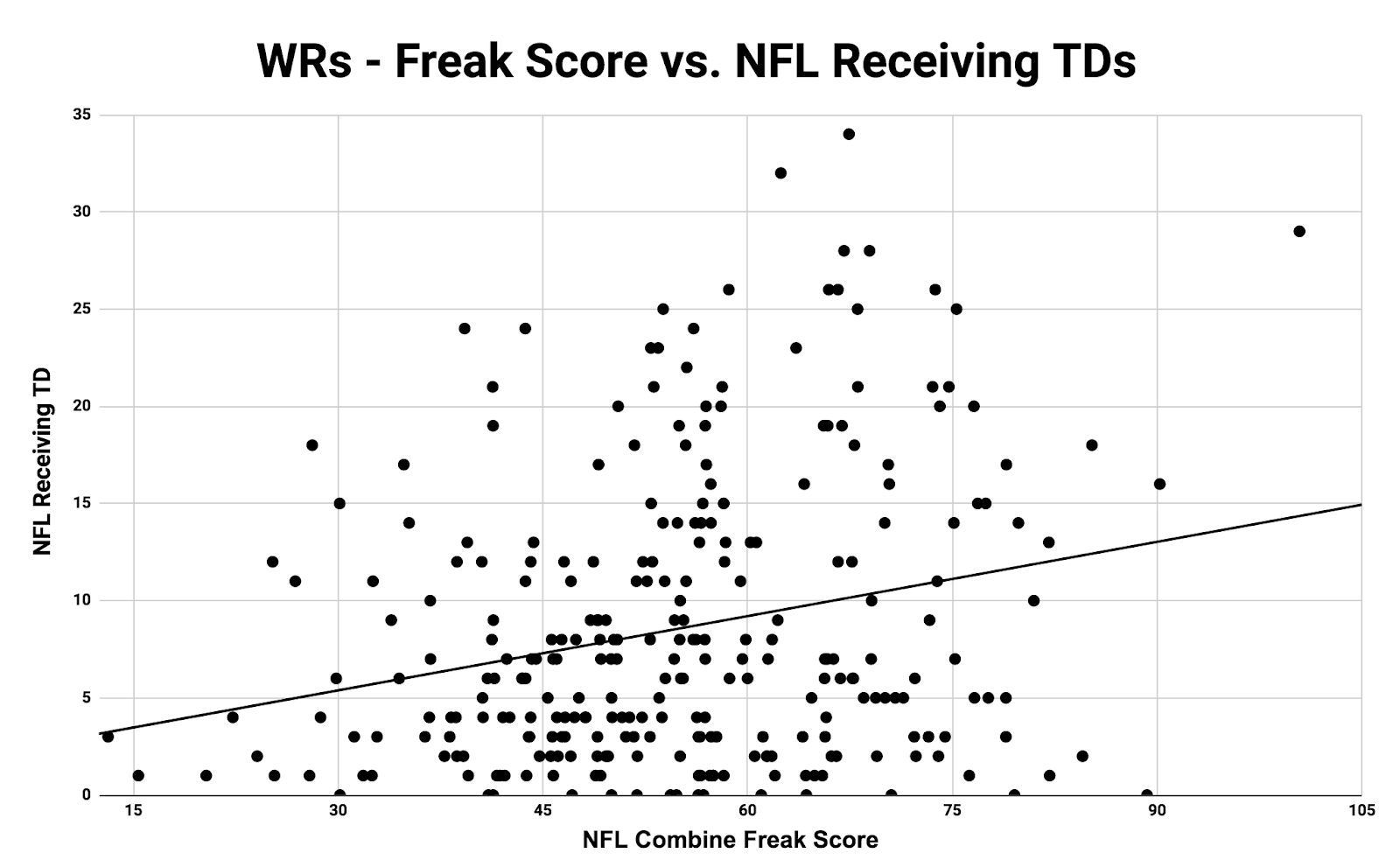 There has been a weak relationship between Freak Score and a wide receiver’s touchdowns during NFL seasons two through four. The higher the Freak Score, the more touchdowns that a receiver has scored. That dot that I know you are staring at is Calvin Johnson. The two dots above 30 touchdowns are Dez Bryant and Eric Decker. 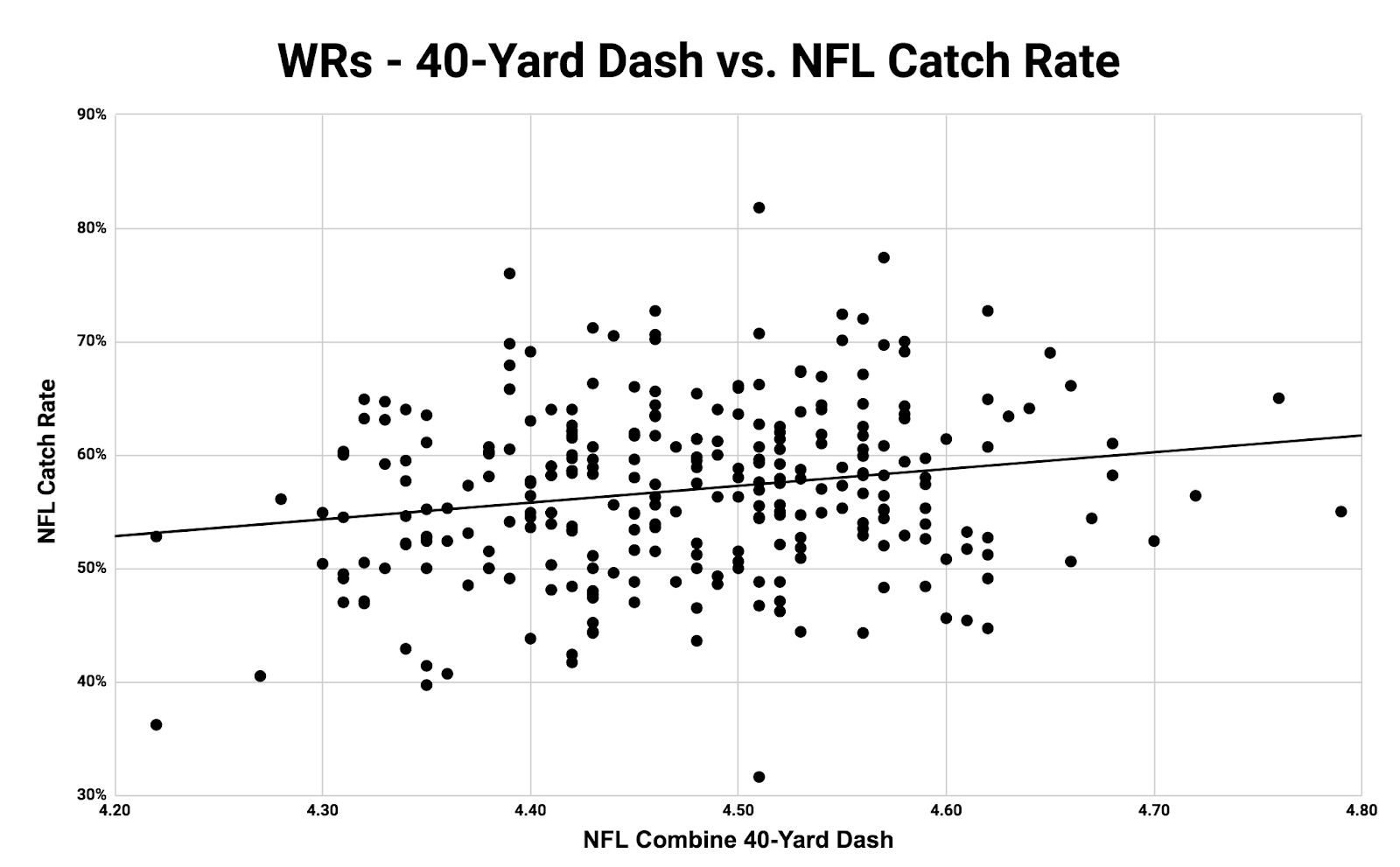 There’s a weak relationship between the 40-yard dash and NFL catch rate in NFL seasons two through four. In general, the slower a receiver runs, the higher the catch rate. There’s probably a strong relationship between routes and speed that would really explain this graph. However, the correlation is small enough to largely ignore outside of the super-fast receivers. There hasn’t been a receiver with a 60% catch rate that ran a 4.30 40-yard dash or faster.

1. Correlation columns for the rest of the positions