Is Trae Young Worth an Early First-Round Pick?

Trae Young’s NBA career got off to a rough start in the first few months of the 2018-19 season, but an eye-catching second half in his rookie season caused a meteoric rise into the first round in 2019-20 drafts for many fantasy owners. He certainly didn’t disappoint in 2019-20 as a top-four scorer, a top-two assist guy and a top-eight player in 3-pointers per game. Here’s a look at his stats over the first two years of his career.

Just outstanding stuff and even flirting with 44 FG% with that many 3-pointers is impressive, especially with how he was expected to struggle there. Plus, Trae was second in the league in free throw makes, which was even trending up.

One of the other aspects of Trae’s greatness for fantasy has been his durability. Let’s quickly go over his injuries in his career.

In his rookie season, he only missed one game and it was because of rest. We also didn’t even have him going to the locker room at all in his rookie year, and the only times he appeared on the injury report were an elbow issue in October (probable) and an illness in January. Amazing.

For a guy who dominates the ball like he does, this is extremely impressive. Plus, only one multi-game absence is good news. Guards are likely to stay healthier than most bigs, so Trae being at age 21 right now makes him one of the most reliable players you can take with your first-round pick. How high of a first-round pick? Let’s go through some stats on Trae.

Volume is king in most fantasy sports, and it certainly matters in fantasy hoops. Trae is one of the ball-dominant players in the league to give him a huge opportunity every night. Young led the NBA in time of possession per game at 9.1 minutes, and did so at 11th in minutes per game. Young also led the league in average seconds per touch at 6.3, dribbles per touch at 6.0, and tied for second in passes received per game at 75.4 (tied with LeBron James, Devonte’ Graham 81.7(!)).

Besides the touch-time lead, the other noteworthy top distinction was Young’s league-leading 15.7 possessions as a pick-and-roll ball-handler. On top of leading the league in 2019-20, that stat is the highest ever since NBA.com started tracking it and it wasn’t even close prior to this year (Kemba Walker’s 12.2 in 2016-17, Damian Lillard 13.5 in second this season). He scored a ridiculous 15.3 points per game as a PNR handler (tied with Lillard), which again would’ve shattered the top guy in previous years (Lillard 12.4 in 2017-18). Compared to last year, Young almost doubled his points off that play with 7.8 per game last year, and he went from 45.6 eFG% on drives last year (46.8 percentile) to 50.6 eFG% in 2019-20 (83.9 percentile). You’ll notice Dame’s name in this paragraph a couple times, and it took him a while to be the dominating PNR presence he is today (percentile has trended up in each year over the last five). Trae could get even better on his pet play next year.

Trae’s range is a big part of his game and he was able to climb into the top-eight per game in 3-pointers at 3.4 (1.9 last year). There really wasn’t a specific reason he was so much better, and he picked it up basically across the board. Here’s a look at his performance on catch-and-shoot treys, the percentage of his treys that were catch and shoot, efficiency on pullups, and some wide-open stats.

He was terrific on catch-and-shoot attempts in 2019-20, but he wasn’t getting as many looks on those (this is very common for younger high-volume scorers). It’s also nice to see that Young had some decent wide-open pullups, and he was still able to knock down them. It was still encouraging to see that he was better on pullup shooting.

Even without the drives factor, Trae was also a whole lot better inside the arc, upping his 2P% to 50.1 from 47.7. If you look at his shot charts over his career, there’s a whole lot to like. 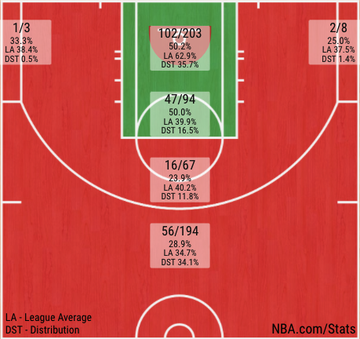 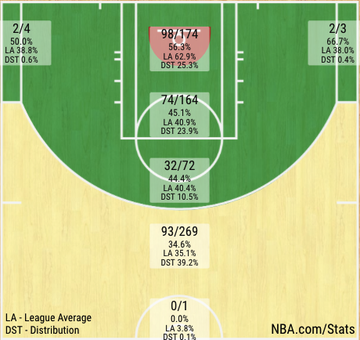 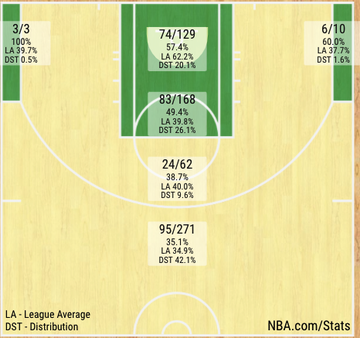 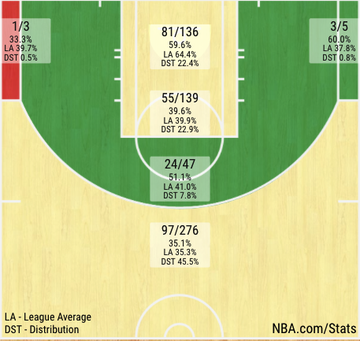 After the slow start, it has a little Vince MacMahon fall-out-of-chair meme to it. A lot of clear and promising trends here, and you love to see it. My favorite is that he was better at the rim in each of these splits. He also cut down on the percentage of his shots in the mid-range, and he’s consistently been around 35% on his above-the-break treys excluding his first 41 games. In his second season, you can also see Trae trading off some of the non-restricted twos for at-the-rim shots. Of course, he was productive on twos as a whole, and the shot distribution was able to offset him shooting 9.8% worse on non-restricted paint shots in the second half. These trends should make Trae an excellent bet to be over 50% on twos next year.

Young was also trending up at the charity stripe with a whopping 10.9 attempts per game at 86.9% made over his last 30. In that span, Trae actually led the league in makes at the line at 9.5 per game to just edge out James Harden (9.4). That made Trae the second-best player for fantasy FT% output in that span (Devin Booker), and elevated him to a top-six guy in eight-cat leagues over this 30-game sample. Without this aspect, he wouldn't be a candidate to go in the top eight.

Young was second in the NBA in assists per game at 9.3 behind LeBron James (10.6). It certainly wasn’t a fluke with Trae ranking second in potential assists per game and adjusted assists (LeBron first in both), and he was third in assist percentage (LeBron, Luka Doncic). Trae also really made his passes count to his main guys. On guys he passed to at least 250 times, it resulted in a shot 45.6% of the time. That’s way more than Luka’s 36.2%, LeBron’s 40.0%, Ricky Rubio’s 37.4%, Ben Simmons 32.6%, Damian Lillard 41.5%, Kyle Lowry 34.8%, Devonte’ Graham 33.5% and James Harden 42.1%. I kind of just invented this stat, but Trae is clearly the top guy among main ball-handlers and chances are he’s the top guy in the league among qualifiers. You want to see your guys pass to shooters, and hey maybe you get some home cookin’ assists.

A lot of this is because many of Trae’s teammates aren’t interested in putting the ball on the floor. John Collins is in the bottom seven for dribbles per touch among those at 30-plus minutes per game, and the rest of the key Hawks are all below 2.5 (Huerter 2.4, Reddish 2.12, Hunter 1.51, Dedmon 0.30. Plus, Clint Capela ranks dead last at 0.27 dribbles per touch (30-plus minutes). Hunter, Collins and Huerter were all great catch-and-shoot guys last year, and Cam blossomed into one over his last 12 at 47%. The Hawks were actually kinda bad overall on those, but they had a lot of terrible shooters pulling them down. They should be a lot better next year now that they have their key players figured out. Plus, the Hawks main guys are highly assisted with Collins at 78.5%, Hunter at 71.1%, Huerter at 62.3% and Cam at 64.8% -- Capela also at a whopping 80.3% (ranked first in the league on assisted twos among guys with 32-plus minutes).

The Capela factor is somewhat interesting from a Trae perspective. Capela’s usage rate being in the teens certainly won’t take many shots away from Trae. However, I was surprised to see how some Capela on/off splits affect FG% for the scorers. Harden shot the ball better next to Capela this year, but he was worse last year (-3.0 FG%), and way worse the year before that (-5.9%). Looking at shot locations and starting with 2017-18, Harden had 55.4% of his twos come at the rim with Capela compared to 69.8 without. In 2018-19, 56.9% of his twos were at the rim with Capela, and that was at 62.0% without him. This year, he had 57.5% of his twos come at the rim with Capela and 62.7% without him. That’s not great, and he shot significantly better at the rim in two of the last three seasons (Harden was better in 2019-20). This isn’t a red-alert issue like how Capela will affect John Collins, but you can certainly see why the Rockets were so willing to part ways with Capela. For what it’s worth, Russell Westbrook also shot it worse next to Capela this season, but part of that is because he went from being terrible while Capela was healthy to being red hot without him.

One last thing worth a mention is how Trae was somehow 11-of-24 on shots from beyond 35 feet this year. That’s even more volume than Damian Lillard’s 7-of-12 from 35-plus feet, but Dame was extremely better in the 30-34 foot range (102 attempts at 41.2% for Dame, 81 at 33.3% for Trae). If Young gets better overall on treys like he has been doing in his career, the Hawks will be an extremely tough team to defend with the gravity Trae will demand.

Before I dug in on Trae for this column, I already had him in my top six in eight- and nine-category leagues (Harden, AD, Lillard, KAT, Jokic). So yes, I had him over guys like Giannis Antetokounmpo and Stephen Curry. Not really close either, and I’m sure people who don’t play fantasy would even understand. I bet on him in 2019-20 and I'm betting on him again.

After going through the numbers, I’m going to keep him at six for standard-style leagues. While I’m a little concerned to see how Capela could affect his production at the rim, Trae’s growth on getting foul calls, shooting on 3-pointers, shot selection and being on a decent team more than offset that concern. He is in arguably one of the best positions to produce stats in the entire league, and he has several low-usage players around him to possibly get him even more shots next season.

I couldn’t argue with those who took Trae first, especially with some ownership concerns on the Rockets right now (to be clear, I still have Harden locked in at one and I won’t be talked out of it unless something wild happens). Elite point guards are really hard to come by in fantasy, and Trae would give you a huge leg up on dimes if you get him right off the bat. Ideally, I’d love to pair him with Bam Adebayo (or maybe Pascal Siakam) and Jonathan Isaac in the next two rounds, and then you can just hammer wings with some PGs and bigs mixed in along the way. Trae is clearly in the middle of the non-Harden top tier for standard leagues.